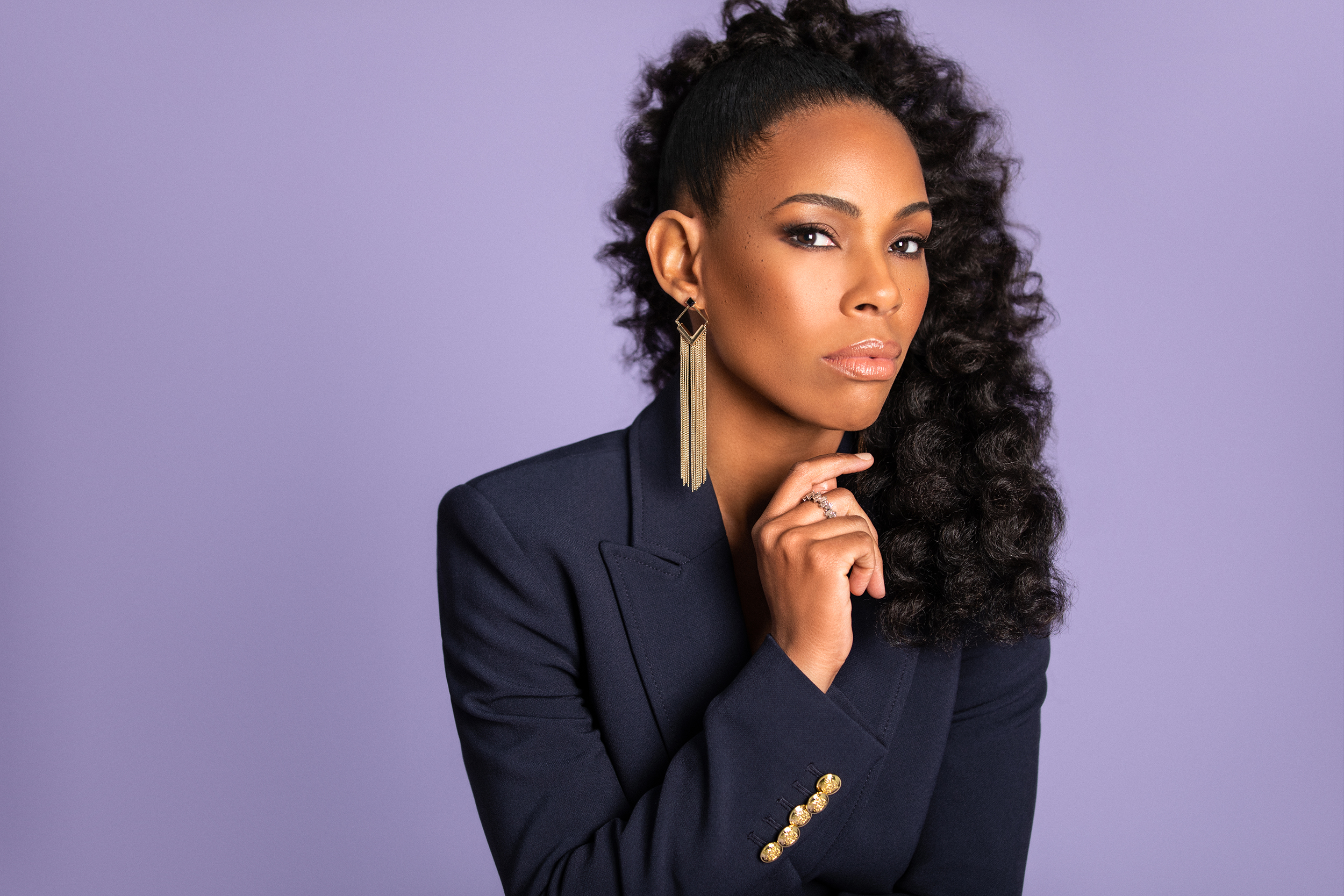 The first time viewers were introduced to “Aunt Louie” on FX’s hit drama Snowfall, she was watching an old episode of General Hospital. Sweet right? Well, she promptly put to bed any notion of her character being a docile woman who enjoys her afternoon stories when she left her show to fight a girl on the front porch of her house. Set in 1980’s Los Angeles, Snowfall tells the story of the first crack epidemic in America and how it was originally funded by the CIA. Allegedly.

Since its debut in 2017, viewers of the show have tuned in week after week making it the most talked about show on social media during its time slot. While the star may be drug kingpin, Franklin Saint, loyal fans know that he would not have amassed the power he has without the woman by his side. His right hand. Can he still thrive now that his #2 wants to spread her own wings?

TV Source Magazine got the chance to chat with Snowfall’s resident Queen, Angela Lewis as season 5 kicks off on what to expect now that the family is fractured. Has Louie’s quest for independence been a gift or a curse? The answer to that might be a little hard to determine.

We ended last season with Louie and Jerome informing Franklin that they wanted to branch out on their own by making him their supplier. Is that still the plan or will Franklin find a way to bring the family back together?

Snowfall has often attempted to portray Leon as Franklin’s right hand, but those of us who know, know that it’s Louie and always has been. There are even times when they two appeared to be closer than Jerome and Franklin. What can we expect the dynamic between them to be now that she’s branching out from him?

That’s the thing; Louie has always been his right hand, but she’s not always recognized as his right hand. And that’s something from the audience, from Franklin and the rest of the family. So I think she doesn’t want to be the right hand anymore. She wants to be her own boss, her own person. And that means that there’s two cooks in the kitchen and that never goes well. I think it’s just a matter of how well they’re able to figure it out and how well they’re able to manage two very strong personalities and two totally different ways of doing things. That is just two totally different ways of doing things. I think the nuances are everything. It’s the fight of the season, you know, wanting to maintain the love and the family, but still wanting to do things your own way.

Louie and Jerome haven’t always been on the same page when it comes to business or Franklin. Will this season see them as a united front or is there still the potential for dissension between the two?

I think both. I don’t think that there is dissension, necessarily. I think with Louis and Jerome, when it’s good, it’s good. And when it’s not so good, it’s quite tumultuous. But I think in spite of it all, they do love each other very much and I think they always fight to find each other in the end. Since Louis was shot and almost killed, that really put things into perspective for both of them. They are wanting to maintain a united front. No matter what comes up, they’ll continue to fight for each other, to find each other, to be on the same page. And I think that’s incredibly beautiful.

Especially considering she got him on that horse. I don’t know how that happened.

(laughs) Something else, right?  We were at the stables practicing, myself and Amin [Jerome Saint]. He wants to be the master of all things. So he was getting all the extra stuff, the extra lessons and the extra tricks and things. I was like, “wait a minute. Louie is the horse rider right now!”

It appears that while Louie still has Franklin’s ear, she may have fallen back on giving her advice. Has she completely lost faith in his decision making abilities after he basically did the opposite all last season?

Yes. I think she doesn’t really feel like Franklin is hearing her so she’s had to make some hard decisions. I do think, though, that she’ll always try to reason with him. Absolutely.

Last season left Louie fans a bit stressed out after our girl caught a stray. Previous seasons have also landed her in some pretty dangerous situations. Will we be able to take a season off from Louie being in peril?

I cannot assure you of that. We’re all at risk on this show! (laughs)

Considering Louie’s previous dust ups with the LAPD, we were surprised to see her on the brink of joining forces with them for her own gain. What can we expect to see with this unlikely alliance?

I would actually wonder why anybody would be surprised at that. Even when she was working with Claudia, they had some LAPD on the books. However interesting and destructive her relationship with Claudia was, she definitely learned a lot from her and having some police on your team is smart. I think Louie thinks that that’s a smart way to go. And you know, you can’t do much more questionable than being on the same team as the CIA! So, why not? If it’s going to keep her informed about what’s happening and if it’s going to be an avenue to be able to have an upper hand in multiple ways, I think she’s going to do that. It’s a matter of finding the relationship that’s going to be mutually beneficial. Also with the cop that Franklin has in his pocket where he’s kind of rogue and definitely not having the family’s best interests at hand, I think she’s looking for a slightly different color.

We’ve thought of Aunt Louie and Uncle Jerome as a unit for so long that we often forget that they aren’t actually married. It looks like that might be changing based on the season 5 preview. What can you share about that?

This season in particular has our characters on a totally different path. Last season had them in some situations where they really had to question what’s important, especially for Louie. And realize that everything can go away really quickly, including themselves. Louie is laser focused this season and really wants to protect everything which is important to her and Jerome is definitely one of those things that is supremely important to her. I’m not going to give anything away! Stay tuned.

I have to ask about Skully. Finding out that he didn’t die on the hospital floor last season was a pleasant surprise, but seeing that he’s still in an alliance with Jerome and Louie was a bit of a curve ball.  How can they continue to work together given their past?

Well, if you will recall, Louis recommended getting rid of Man Boy before the double dip he tried to pull off. Skully always stays in his lane. He might be crazy, but he always stays in his lane. After he came to the hospital to kill Louie, she was able to talk him down and to speak to him in a way that made sense to him. That allowed for a sort of bond between Louie and Skully. And when Louie was able to prove to Scully that Man Boy was double crossing him, from then on, he really had her ear and understood that she wasn’t out for him and that she was honest. I think honesty goes a long way with Scully. Louie is going to use that to her advantage.

For me, Louie is a flawless character, but as her portrayer, can you tell us one thing you love about her and one thing you dislike?

I try not to judge Louie because I don’t think I would be able to play her if I was judging her. I love that Louie goes for what she wants. I love that she stands in her power. She doesn’t take no for an answer, and she tries to take what she’s given and move in a way that works for her. What don’t I like about Louie? I don’t know, I kind of like Louie. I guess I don’t like that she’s a drug dealer! (laughs)

Unfortunately, even with some progress made, the number of dramas led by a majority black cast making it to 5 seasons is still relatively low. What is it about this show and this cast you feel keeps viewers coming back every week?

I think we have a stellar group of artists that are really smart and really pay attention to story. I think the process is relatively collaborative. There is an open door where we’re able to ask the writers questions and even the showrunner. We can ask questions and express our concerns. Even if our questions and concerns don’t always make it to the script, at least we’re heard. At least there’s a conversation that’s being had. And I think as a group, we check in with each other. We love each other. We care about each other and we care about each other’s artistic integrity. If one of us is not understanding something or if one of us understands something that the rest of us are missing, there’s always conversation on set. We figure it out. And I think that shows up on screen. We trust each other because we know that we have each other’s backs, and that’s everything.

Much of the show, its content and Louie’s characterization can be extremely heavy and serious. Are there things you do to decompress after scenes wrap?

All of us have such good relationships that we just try to keep it light even when the cameras are rolling because it can be a lot. But there are certainly instances where an actor needs to maintain that space, that solitude or that energy, that they need to really bring the fire. I think in those instances, it’s just important for me to laugh at the end of the day. It’s important for me to formally say good night to Louie and to the situation. I also recently moved out of the city, so I have a nice, decent ride home to decompress and put on my 90s R&B and sing and let it go before I get home.

Last question and it’s something we’ve been dying to know since season 3. How did Claudia REALLY die?

(laughs) So Louie did kill her. She did drown her. But it didn’t happen in the way that Andre said. The fighting and screaming and water splashing everywhere, that did not happen. Claudia was taking heroin to manage her pain. And in that bathroom scene, she asked Louie to help her out. And she did. Claudia knew that Louie was staying clean. She knew that Louie was focused and had goals of her own. And when she got abusive, in that moment, I think it just tipped Louie and she was able to push her down in the water and there wasn’t much of a fight.

Snowfall is currently airing its fifth season Wednesdays at 10:00 pm on FX Network. Episodes are available next day on Hulu.

On November 8th 1965, Days of Our Lives broke new ground as the first soap…

Peacock’s limited series A Friend of the Family premieres October 6 with three episodes. The…