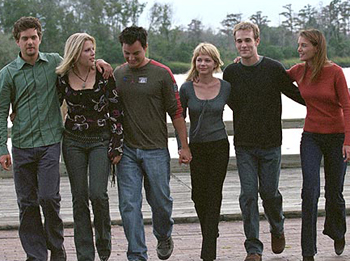 It’s been five years since Joey (Katie Holmes) chose Pacey (Joshua Jackson) over Dawson (James van der Beek). Some have reached for the stars while some are more comfortable a little more closer to home…like Wilmington, NC where Dawson’s Creek used to tape.

What Happened To Dawson
BY: Trish Mahon
NEWS EDITOR

It’s been five years since Joey (Katie Holmes) chose Pacey (Joshua Jackson) over Dawson (James van der Beek). Yes Dawson Creek fans, in 2003 was the series finale of one of my personal favorite dramas. All of the actors in that series have gone on to bigger and better things. Some have reached for the stars while some are more comfortable a little more closer to home…like Wilmington, NC where Dawson’s Creek used to tape.

James Van Der Beek is going home so to speak. He is guest starring in an episode of One Tree Hill where he will a director who just may want to turn Lucas’ book into a movie. Talk about irony. Van Der Beek’s Dawson, portrayed a director on Dawson’s Creek. Chad Michael Murray, who plays Lucas on OTH, got his big break on Dawson’s Creek. Producers thought it would be a good idea for Van Der Beek to portray the director on OTH. Van Der Beek was available and his episode will air in November. Since the end of DC, Van Der Beek has been working steadily and most recently has guest starred in Criminal Minds, How I Met Your Mother and Ugly Betty.

I think I can safely say that almost everyone who has ever picked up an entertainment magazine knows a little something about Katie Holmes since she has left Creek. She is happily married to Tom Cruise and has a daughter Suri. You can currently see her on Eli Stone as a non profit lawyer that will show up in one of Eli’s (Jonny Lee Miller) dreams. Holmes is also starring in her first Broadway show, All My Sons with John Lithgow and Dianne Wiest. Holmes can also be seen in Batman Begins, Mad Money and Thank You For Not Smoking.

Joshua Jackson is starring in the cult hot drama Fringe. The Fox sci-fi series has been picked up for a full season so we will see Jackson on our TV screens through the whole TV season. Jackson plays Peter Bishop, the son of a scientist who has been locked up in a mental facility for over fifteen years. Jackson is getting rave reviews for his portrayal of Peter. Fringe also stars Anna Torv, Blair Brown and Mark Valley. Since Creek, Jackson has appeared in the Golden Globe nominated movie Bobby, Aurora Borealis, and Shutter.

Michelle Williams was one of the original cast members of Creek and she played Jen Lindley. Williams is best known for her role as Alma in the Oscar winning film Brokeback Mountain.. Williams’ portrayal of Alma, the wife of the late Heath Ledger’s character Ennis, received a Oscar and Golden Globe nomination. Williams and Ledger met on the set and the two became involved. The two have a child, Matilda. Since the passing of Ledger in January 2008, Williams has not been working very much but can be seen in Wendy and Lucy and Deception. She has several projects that are in post production now.

Jack McPhee was played to perfection by Kerr Smith. Jack McPhee was one of the first teenagers on television that came out on television. Smith played Jack as a teenager much like any teenager, he had problems just like everyone else. To his friends he was Jack and they didn’t care that he was gay. They accepted him. Since Creek’s end, Smith has been seem in Charmed, The Closer and Justice.

Maybe someday, we will have a Dawson’s Creek reunion show…hey one can only hope.

Welcome, Drewds! For those of you new here Wine and Whine is a podcast where…

Something wicked this way comes. And who better to welcome it in then Sabrina Spellman…

Welcome back to Wine and Whine! Allie and I are joined by @astro_latte in our…

Welcome back to TV Source, guys! Sorry for missing 5×17 last week but no worries!…