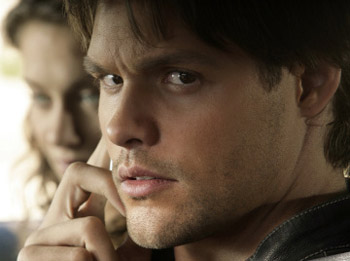 Knight Rider, starring Justin Bruening (ex-Jamie, AMC) has been picked up for a full season.

Knight Rider Picked Up For A Full Season
BY: Trish Mahon
NEWS EDITOR

NBC has announced that Knight Rider will be picked up for a full season. Nine more episodes of the hit series starring All My Children alum Justin Bruening (ex-Jamie) as Michael and Deanna Russo (ex-Logan, Y&R) have been ordered, Ben Silverman, Co-Chairman, NBC Entertainment and Universal Media Studios announced. "Gary Scott Thompson and the great cast and crew of ‘Knight Rider’ continue to deliver fun, action packed adventures every week," said Silverman. "Kitt and Michael will continue to travel across the country on their fun, escapist ride pursuing bad guys and saving the day."

Knight Rider is averaging a 2.4 rating, 7 share in adults 18-49 and 7.4 million viewers overall so far this season in "live plus same day" averages. "Knight Rider" is the #1 regular series in its competitive time period in all key adult-male demographics and won the slot in adults 18-49 with its most recent telecast on October 15.

Knight Rider is one of the few successful shows that have been resurrected from the past. The original Knight Rider starred David Hasselhoff as Michael Knight. Both shows showcase the car KITT (Knight Industries Three Thousand). In the original series, KITT talked, had a GPS system and could reach speeds no cars could reach. Nowadays, KITT has been upgraded. KITT is now equipped to do things that no other car could accomplish such as having artificial intelligence, weapons, the capability of transforming into other vehicles and using holographic imagery.

John Aniston, the beloved actor who played Victor Kiriakis on Days of Our Lives, has…