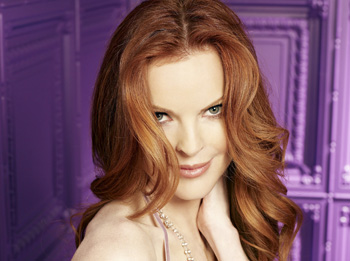 Bree meets Andrew’s future mother-in-law as Desperate Housewives returns from the winter break with its first new episode of the year!

Desperate Housewives returns from the winter break with its first new episode of the year!

In the episode “Home Is the Place,” airing Sunday, January 4, 2009 on ABC, Bree meets Andrew’s future mother in law (guest star Joanna Cassidy) for the first time. The two ladies clash over each other’s efforts to win over their sons affections.
Gabby urges a reluctant Carlos to accept a new six-figure job, even though it means less time at home with her and the girls. While Jackson is away, Susan turns to a surprising person for some company.
Lynnette catches Preston talking to his runaway twin brother Parker on the phone.
Dave’s odd behavior draws Edie’s suspicions.

“Home is the Place”was written by Jamie Gorenberg and directed by David Grossman.

On the 1/11 Episode of Housewives:

The episode will be available for airing on Monday at ABC.com