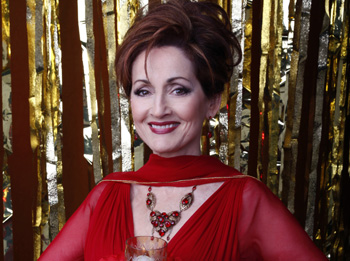 Dorian reveals a big surprise at the Go Red Ball.

For Whom the Wedding Bells Toll

After crashing what they expect to be David’s and Dorian’s nuptials, Rex and Gigi remain as witnesses for Moe and Noelle’s marriage. David and Dorian tie the knot the way Buddhists do. Dorian schemes to keep her marriage to David under wraps until the Go Red Ball, and they take up residence at the Angel Square Hotel. Beaver Calhoun’s search for David brings him back to Llanview. Rex returns to Llanview and informs the Buchanans that he lost David and Dorian, but they keep him on the case and tell him to attend the Go Red Ball. Dorian plays cat to Bo, Nora and Clint’s mice at the ball, then announces that she and David are married. David challenges Dorian about the real reason she married him. The mysterious stripper follows Rex and Gigi from Las Vegas, breaks in and swipes Gigi’s dress and ticket to the ball. Wearing a blue dress, Gigi crashes the ball and is shocked to see who is wearing her dress.

Blair confronts John about his conversation with Marty and angrily walks away. John later charms Blair into attending the Go Red Ball with him. Tea convinces Todd to be her escort. Wes and Marty crash the ball. Tea needles Todd and Blair when she dances with John, who questions her about Lee Halperin’s murder. Wes accuses Marty of using him to get to John. Wes and Todd brawl.

Tea admits to Lola she believes Vanessa killed her mother. Jessica overhears Brody admit how much he misses her. Jessica confesses she doesn’t feel a connection to Chloe Matthew admits to Bo and Nora that he was smoking pot to impress his peers. Schuyler asks Starr to be his assistant as he works on his Master’s thesis.

Lola tells Tea that Vanessa led her to the knife that killed her mother on Monday, February 9.

Nora and Bo smell pot outside the mansion and confront Matthew on Tuesday, February 10.

The situation becomes awkward when three couples converge at the Go Red Ball on Thursday, February 12.

David is grateful to learn he has a family on Friday, February 13.

Marty makes a horrific discovery. David and Dorian evict the Buchanans. Blair wakes up in Todd’s bed, and John is hurt. Natalie wants to know more about the night Chloe was born. Cristian doesn’t believe Lola’s accusation against Vanessa.