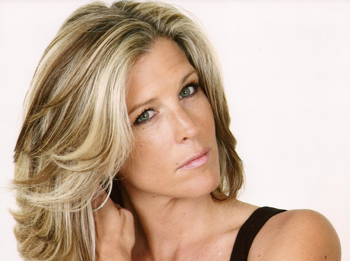 Carly suffers complications during childbirth and needs help from Claudia!

After surviving the crash, Carly makes her way to an abandoned cabin nearby in the hopes of delivering her baby without complications. Just as another painful contraction hits, Carly is joined by Claudia. There are complications, as Carly’s baby is about to be delivered breech and she needs Claudia’s help. With the two of them working together, Carly delivers a healthy baby girl. Michael stumbles upon the car accident and soon discovers Claudia with Carly and the newborn baby at the cabin. Claudia seems to be forming an unhealthy bond with Carly’s newborn. Michael’s protectiveness over Carly turns deadly. Jason and Sam soon arrive at the cabin, and Jason takes control of the situation. Sonny and Jason agree to do whatever it takes to protect Michael.

Carly and Josslyn are rushed to the hospital where they are reunited with Jax. Carly is distraught after her ordeal at the cabin and she tells Jax all about it. Jax insists Carly tell the police the truth about what happened at the cabin. Carly confronts Jax about knowing Jerry and Claudia’s involvement in Michael’s shooting and he not telling her the truth. She wonders if she will ever be able to forgive him for keeping it from her. Jax and Sonny have an explosive confrontation. Carly can’t bring herself to forgive Jax. Johnny enlists Dominic to help him find out what happened at the cabin. Olivia worries Dominic will use Johnny to bring down Sonny.

Dominic and Lulu go in search for Carly when Lulu becomes concerned. Lulu finds herself in extreme danger when she falls through the floorboards at the Zacchara mansion and when the basement begins to fill up with freezing water, drowning threatens Lulu. Dominic stays with Lulu, refusing to leave to get help. Lulu remembers learning the truth about Dominic. Johnny and the rescue team get to Lulu just in the nick of time. At the hospital, Dominic tells Lulu he’s not giving up on his mission to bring Sonny down.

Luke notices the bond between Nikolas and Elizabeth and becomes more concerned. Jason is being watched from afar. When Sonny asks Alexis for help, Alexis will do it if he keeps his distance from Kristina. A loose lipped Maxie leads Johnny to jump to the wrong conclusion about Sonny. Kristina sees her mother in a whole new light after having previously witnessed Sonny’s brutal side.

Kristina sees Alexis in a new light after having witnessed Sonny’s brutal side on Monday, November 2.

Olivia offers Sonny a shoulder to lean on, on Tuesday, November 3.

Michael’s protective instincts kick in when he finds Claudia and Carly at the cabin son on Wednesday, November 4.

Dominic agrees to help Johnny find out what really happened that night on Thursday, November 5.

Jax and Sonny have an explosive confrontation on Friday, November 6.

Elizabeth and Nikolas succumb to temptation. Jason grows more concerned over Michael’s behavior. Jax and Carly are at an impasse. Elizabeth is torn up with guilt. Luke confronts Nikolas about his affair with Elizabeth. Anthony wants revenge against Sonny. Dominic warns Sonny there could be trouble brewing. Olivia pleads with Lulu to keep Dominic’s secret. Kristina covers for an abusive Kiefer. Alexis urges Carly to forgive Jax. Elizabeth blows up at Nikolas. Sonny clashes with Carly over Michael. Lulu faces a dilemma. Dominic dodges a bullet. Jax wants to pin a murder rap on Sonny. The mystery man is up to no good.