It began as an exciting, edgy and provocative match-up. With much promise and potential, this hot couple appeared ready to tread bold new territory in the world of daytime drama. Who am I speaking of? That would be ATWT’s Luke and Noah.

It began as an exciting, edgy and provocative match-up. With much promise and potential, this hot couple appeared ready to tread bold new territory in the world of daytime drama. Together, they sparked both controversy and discussion with a storyline that was modern and at the same time long-overdue. Yet with all that promise, somewhere along the way their plot line stumbled and now they’re about to fall right off the rails. Who am I speaking of? That would be As The World Turns’ Luke and Noah. The couple that once shared Daytime TV’s first gay kiss has lost that loving feeling. It wasn’t always that way, and for a long time, I did love this storyline. Even as a straight female, I found the story of star-crossed Luke and Noah ("Nuke") romantic and sexy. It mattered not one bit that this particular story happened to be about two men. I could easily relate to their conflicted feelings, longings and hurdles. All I cared about were the characters and their journey toward each other. 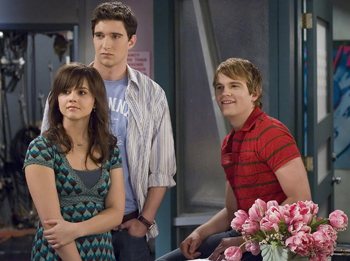 Almost three years ago, Luke Snyder and ATWT viewers first met Noah Mayer. By this point, Luke was openly gay. Noah, however, was not. In fact, Noah was about as far in the closet as he could get and even began a relationship with Luke’s good and female friend Maddie Coleman (Alexandra Chando). But the attraction between Luke and Noah was strong, and as Noah fought his true feelings, both actors showed real longing for each other. It was classic soap opera. True love denied. And there was a connection between actors Van Hansis (Luke) and Jake Silbermann (Noah) that rang true and real.

Indeed, one steamy scene had Luke, Maddie and Noah going for a summer swim at Snyder Pond. When Maddie had to unexpectedly leave, some innocent horseplay between the two men suddenly turned pretty hot. And as the two simply stared at each other, with no words spoken, viewers could see the longing and desire. And it sincerely didn’t matter to me that it was two men involved. It only mattered that I was engrossed in their story. It was simple and effective. It was good TV.

Eventually, after many fits and starts, Noah did admit his true feelings for Luke, came out of the closet, and the two began a relationship. But in true sudsy soap fashion, happily ever after was not to be for Nuke. Disaster after disaster has befallen the star-crossed couple. And while some of those calamities were undeniably just good soap melodrama, many seemed to be obvious contrivances designed by nervous soap executives to keep this "controversial" couple apart.  Perhaps even a way for those execs to claim forward-thinking with a gay storyline, without having to actually commit to it. And so, as much as I hate to say this, the journey of Nuke is starting to wear me out.
I understand conflict is a staple of soap operas. But I also believe in the importance of a few periods of true happiness and fulfillment for our favorite characters.  It’s our reward for hanging tough with them through their challenges and without them I feel cheated as a viewer.

And the events that have occurred to keep this pair apart are numerous. Even by soap opera standards, there’s been plenty of drama for this relatively new couple. First, after finally admitting he was gay and beginning to date Luke, Noah’s crazy and homophobic Father, Col. Winston Mayer (Daniel Hugh Kelly), tried to kill Luke. In the struggle, Luke was paralyzed.  Temporarily, but still paralyzed. That tends to throw a monkey wrench in any couple’s plans. Then, Ameera (Tala Ashe), an Iraqi refugee with ties to Col. Mayer, unexpectedly showed up in Oakdale. And of course Noah had to marry her, so she could stay in the country. Which kept Nuke apart yet again. I can only assume there were no single, straight men in Oakdale who could fill in as groom.

Eventually, the marriage to Ameera was annulled. Would Luke and Noah finally have a chance to be together? No, as a whole other host of unfortunate events, like lecherous step-grandfathers and a weird living arrangement with Emma Snyder (Kathleen Widdoes) continued to unfold, preventing this couple from actually being a couple. In fact, it took 514 days for this pair to consummate their relationship.  In other words, it took almost a year and a half for them to hit the sack…on a soap opera. They even went 211 days between kisses….on a soap opera. I’m not denying that restraint can be admirable. And I’m not arguing against taking a relationship slowly. Nor am I saying that choosing to not have sex is wrong, but on a soap opera that rarely happens. Especially on ATWT where storylines tend to move very quickly. 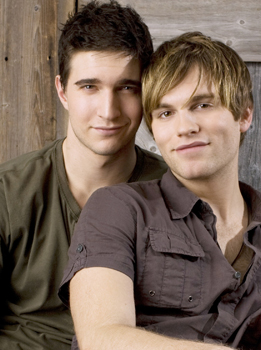 In the most recent setback for Nuke,  Noah has been blinded in an accident that he blames Luke for causing.  The fault Noah has placed at Luke’s feet is irritating to watch, and doesn’t actually make much sense.  It’s an artificial plot point that isn’t working, other than as another way to create distance between the two. In recent scenes, it’s actually very difficult to sense much love between the two at all.  At times,  Noah even seems to actively dislike Luke. He is angry, morose and mercurial, blowing either hot or cold, depending on the circumstance.

It would now seem Noah’s moral high horse depends not on character development, but only on what needs to happen next in the story to keep these two apart.   Indeed, as Luke’s plan for Dr. Oliver to help Noah hit a roadblock, Noah reverted back to his almost-hateful attitude regarding Luke.

Blind or not, Noah’s current M.O. of "I love you; no wait;  I love you not" is tiresome, and in fact, I find Noah has become a very unlikeable character.  I can’t decide if the writers intended this viewer reaction, or if it’s an unintentional by-product of some hastily ordered storyline adjustments, with Noah’s character being the collateral damage.
Regardless, the longing and chemistry that this couple initially brought to the screen has vanished. For my money, their storyline has become forced. If anything, Luke and Noah seem to be pedaling backwards with each subsequent storyline. And to a large degree, I blame those that wear suits (TPTB) for refusing to let Nuke become a fully-evolved couple. Consequently, my interest in seeing this couple survive has been seriously, if not permanently, damaged.

In fact, I now find that Dr. Reid Oliver and Luke Snyder actually share more on-screen pizazz. There is a certain underlying tension to their scenes together that’s intriguing.  I’d root for them, but I doubt they’d have any better chance of making it than Nuke had.