In the last few months, ATWT has treated its fans to good old-fashioned soap opera storyline with the quadrangle of Carly, Jack, Janet and Dusty. Throw into the mix an unborn baby and an almost-grown daughter with leukemia and this current story featuring the above-mentioned foursome couldn’t get much more melodramatic.

In the last few months, ATWT has treated its fans to good old-fashioned soap opera storyline with the quadrangle of Carly, Jack, Janet and Dusty. Throw into the mix an unborn baby and an almost-grown daughter with leukemia and this current story featuring the above-mentioned foursome couldn’t get much more melodramatic. I for one am thoroughly enjoying it. This has turned into a fun yet emotional, dramatic yet comical, classic daytime drama storyline. This storyline wouldn’t nearly be as captivating if it wasn’t for the four characters involved. 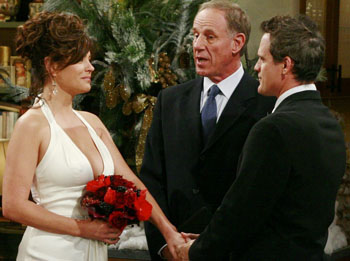 To recap: Jack (Michael Park) and Carly (Maura West) are currently divorced (again). Jack married Janet (Julie Pinson), but their marriage faltered after Jack accidentally shot and killed his brother Brad (who was the father of Janet’s cancer-stricken daughter, Liberty). Jack and Carly reunited during Jack’s struggle to find redemption and Janet found feelings for Dusty (Grayson McCouch). In the meantime, Jack and Janet slept together to create a baby to potentially save leukemia-suffering Liberty’s life. Janet got pregnant and Jack turned out to be the father. But Jack and Janet signed divorce papers and Dusty and Janet got engaged. Carly and Jack pledged their ‘true northiness’ to each other again, with Carly vowing to stand by Jack as he plans to raise another woman’s child.

The drama continued with Janet’s Dad shooting Dusty and Jack struggling to remain true to Carly and yet honor his responsibilities to Janet and their unborn child. And through it all, Carly struggles to remain sober and Dusty swears to love Janet and Jack’s baby as his own. This is great soapy serial stuff! How much more melodrama could you want?

Let’s add in to the mix the wonderful and somewhat surprising link between Carly and Janet. Almost nothing provides more guilty entertainment pleasure than two women hating on each other and these two do it with absolute relish. The scene where Carly tells Janet she knows about Janet’s affair with Dusty was priceless. Though it wasn’t a lengthy scene, all of the animosity the ladies have towards each other was caught in that one scene in the hospital corridor. The mutual resentment, anger, bitterness, and even their shared concern for Liberty was all played out in just a matter of moments. It was brilliant.

The wonderful cat fighting material is balanced out by surprising moments of grudging respect for each other. When Janet, who was in the hospital chapel praying for Liberty, asked Carly to pray with her, the heartfelt but not overplayed sincerity of both was touching. It’s a nice counterpoint to the women always competing with each other for Jack’s attention and affections.

Jack himself has found some interesting interplay with Dusty. Their scenes together have been a biting and chest-thumping portrayal of two alpha males battling for dominance in a charged situation. Jack finds a way to almost always avoid calling Dusty by his given name, instead sneeringly referring to him as "Donovan". Dusty in turn, keeps flaunting his wealth, in a seeming attempt to prove he has the superior ability to provide for Janet and her baby. Meanwhile Jack insists he will be the active parent in his unborn child’s life, and derides Dusty for wanting to "take his kid" (which may also be a knock on Dusty’s surrogate parental role with Craig’s son, Johnny).

There have also been light-hearted moments between the two male leads. I know I’m probably in the minority here, but I thought the "bacon and egg sandwich" scene was funny, and just so typically male.  Both Jack and Dusty offered pregnant Janet her favorite sandwich, with Dusty just beating Jack to the punch. When Jack became a tad miffed at being one-upped, I did not take that to mean he was in any way pining for Janet or trying to hold on to both Carly and Janet at the same time. I took it as typical male-on-male competition, regardless of its inconsequential nature. It was funny and real. Soaps don’t often have many interesting, dynamic moments between two male leads, or two women leads for that matter, so the fact this storyline has provided both is a great bonus.

Romantically, the Dusty/Janet matchup intrigued me at first, and I genuinely believed it was a pairing well-worth exploring. I lost interest for a while, however, as the writers tried to move this potential relationship along way too fast.  Maybe it was the cancellation announcement accelerating some storyline plans, but since ATWT has a tendency to rush at the best of times, I’m not betting on that explanation. And Dusty’s sudden declaration of undying love for Janet and her unborn baby seemed to come too soon and this pairing was rapidly becoming contrived from my perspective. However, I felt the writers right the ship when they had Dusty buy Janet that house.  It was unabashedly sentimental, but still effectively clever (not to mention another attempt by Dusty to prove his wealth over Jack) and it spoke volumes to Dusty’s state of mind concerning Janet. As a viewer, I melted at the gesture and instantly felt re-connected to the match-up of Dusty and Janet. 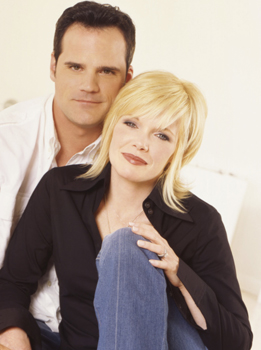 I’ve always felt that magic with Carly and Jack and I believe they are the one of daytime’s best SuperCouples.  ATWT is an infinitely better show when they’re a couple, or at least working their way towards becoming a twosome. There are oodles of shared history in their almost 13 years on-screen and I’ve remained a stalwart fan of Carly and Jack for just about that long. Through both their wonderful storylines (like chasing down Teague and admitting their true feelings for each other)  and their not-so-good storylines (like Carly’s brain tumor) I have watched them break up and make up, hate each other, love each other, fight and laugh. Even though past horrible story-making decisions threatened to permanently destroy the match-up, their chemistry has remained constant and intact.

That said, I am not now, and have never been, a CarJack fan who refuses to appreciate the merit of other characters just because they share the same air as my favorite duo and I’m just as likely to enjoy a storyline that creates tension and drama between the star-crossed CarJack as I am the storylines of them united and strong. But united and strong is indeed the preferred outcome and I breathed the same sigh of relief Jack seemed to when Janet signed their divorce papers.

So I realize my obvious bias is showing when I state that this charmed passion between Jack and Carly has only gotten better with time. They’re like fine wine, improving with each passing year and they are true soap opera magic. With only five months left on ATWT’s calendar, the writers need to be milking all that CarJack mojo for all its worth.  Similarly, Dusty Donovan, a character on ATWT for over 25 years, finally deserves a happily ever after and I think it’s time he finds that picket fence ending with Janet. And so I can’t overstate the importance this Quad story has during this, ATWT’s apparent last act. I intend to enjoy each and every scene of this plot line, and relish in all four good characters chewing the heck out of the scenery as they sail off into the sunset.