Lisa revels in every opportunity to put Patrick on the spot when he is with Robin. 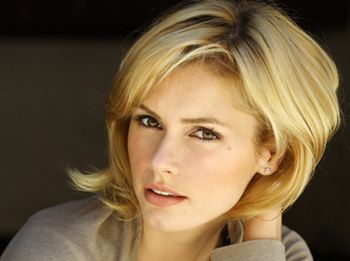 Pulse Poll Rankings for Wk. of 6/28/10 | Vote for your favorite actor, actress, and couple for the week of 7/5 in the Pulse Poll beginning at 4PM!

Jax fears Franco’s presence when he encounters Franco in the park. Jason, Dante, and Spinelli figure out the connection between Franco and “66”. Jason and Dante track down the lead and find a flyer announcing a live performance at Jake’s by artist Kalup Ishmael. Franco rents out Jake’s for the night just before Jason, Dante, Lulu, Matt, Maxie, Maya and Brook Lynn show up. Sam’s romantic night with Jason is interrupted by a visit from Franco. Jason, Dante, and Lulu ponder what the connection is between Franco and the song performed at Jake’s. Armed with a gun, Sam contemplates apprehending Franco, but he warns Sam that if she apprehends him, Jason will have to go back to Pentonville. She is shaken and allows Franco to leave.

Franco meets with Kalup after his performance at Jake’s and recruits him for his masterpiece. Dante, Jason and Spinelli begin to unravel the mystery of Franco’s clues. Franco pays a visit to Lulu, who is alone at Kate’s office. Jason, Dante and Spinelli put together that Franco is committing murders and chronicling crime scenes in cities along Route 66, mirroring the song lyrics and conclude his final destination must be Los Angeles. Franco threatens Lulu that he may kill her on the spot to torture Dante. Now that Franco’s clues are understood, Ronnie seizes the opportunity to take Jason back to Pentonville. Jason receives another crime photo from Franco of his toy monkey in a public plaza (The Pacific Design Center in Los Angeles).

Claire discovers Sonny with Michael and threatens to take Michael back to prison for violating judge’s orders. Sonny tries to woo Claire with a homemade dinner but is interrupted by Johnny. Kristina admits to Michael that she likes the boundaries set by Sonny because it shows he cares. Michael tells her he still plans on taking over the family business as soon as he completes his sentence. Sonny is dragged in for questioning about the car bombing. Claire warns him Lucky has a lead which could lead right back to him and implicate him. Sonny pulls Claire into a hot kiss and Claire further pretends to fall for Sonny. Claire assures Lucky she isn’t falling for Sonny’s charming ways. Claire suggests Sonny walk away from the mob so he can have the relationship he wants with his kids.

Kristina is assigned a new study partner as she is ready to re-assume her studies. But when her study partner Taylor reaches for a book, Kristina freaks out thinking Taylor is about to hit her. Kristina tells Alexis about what happened at the library with Taylor. Sonny and Kristina connect when Sonny understands what she went through when Taylor inadvertently echoed her experience with Kiefer. Warren Bauer informs Alexis the wrongful death suit against her is in progress.

Liz encounters Helena and stands up to her. Helena contemplates telling Liz the truth about the baby’s paternity. Shirley is pleased to see Liz and Nikolas re-connecting. Helena continues to plot the downfall of the Spencer family. Liz begins to have contractions and goes to the hospital. Despite taking medication to slow down the delivery, Liz has no option but to go into early labor.

Jax and Carly are on the verge of a reconciliation but Skye interrupts. Michael tells Carly he thinks she should give Jax another chance. Carly asks Jax if they could take the family sailing. Jax is overjoyed at the potential reunion between him and Carly. Spinelli advises Carly to pursue Jax if she wants him back. Spinelli tells Maxie that he is letting her go.

Robin is confused when Patrick turns down having sex with her in the supply closet. Steve has a hard time trying to hide the truth from Robin when she questions him about Patrick and Lisa’s successful surgery on Shirley. Lisa takes advantage to every opportunity to put Patrick on the spot when he is with Robin.

Ethan goes to the hospital for stitches after he has an accident. Maya opens up to Ethan about her romantic past.

Claire finds Michael with Sonny and threatens to report Michael to the judge, thereby revoking Michael’s release on Monday, July 12.

Sam prepares for a romantic night with Jason, but Franco appears at the door on Tuesday, July 13.

Helena remains spiteful of Liz, plotting the downfall of the Spencer family on Wednesday, July 14

Dante, Jason and Spinelli begin to unravel Franco’s clues, determining that Franco is trying to lead them to a location according to the song lyrics of “Route 66” on Thursday, July 15.

Despite taking medication to slow down the delivery, Liz has no option but to go into early labor on Friday, July 16.

The ID bracelet on Liz’s newborn has some unlucky numbers. General Hospital goes into lockdown. Warren goes on a rampage. Skye steals back Alcazar’s fortune.