On what should be the happiest day of her life, Kate finds herself in mortal danger.

She Should Have Listened To The Omens….

The big story for Port Charles this week is the wedding of Sonny Corinthos & Kate Howard. The week begins with Sonny tracking down Kate’s cousin Olivia (Lisa LoCicero) in Bensonhurst. The two former lovers reminisce about their dating and Kate’s decision to leave her past behind her. Sonny convinces Olivia to come to town for the wedding, something he may regret later.

A nervous Kate wonders if the bad omens before her wedding was trying to tell her something, but Sonny dismisses it as foolishness. Kate opens up to Sonny about her parents death and what she left behind as Connie Falconeri. Kate’s fears still aren’t eased as she’s overcome with a bad feeling during the rehearsal.

Carly is pleased when she learns about Kate’s past from Olivia. The tension between Kate and Olivia comes to a head when the two fight the day of the wedding. What is supposed to be a happy day will soon turn into one of the worse days of Kate’s life when the bride is shot while taking her vows. Who is the culprit?
Sonny is pissed and hell hath no fury like a pissed off Sonny Corinthos. Jason won’t be pleased with some of the demands Sonny makes after the wedding…..

Lucky and Nikolas are heartbroken for Lulu when it seems as if Lulu imagined Laura’s recovery. Sam tells Jerry no nookie until he breaks it off with Alexis. Maxie has her own reasons for getting Jason to attend the wedding…which he eventually does with Carly. Someone overhears Lulu admitting her role in Logan’s murder to Laura. Jason gets tough with Anthony. Spinelli is thrilled for Jason & Elizabeth when he learns of Jason’s intentions. Jax and Carly move ahead with their divorce. Nikolas isn’t happy when Jax turns down his offer to buy the Metro Court.  Jason and Elizabeth are in a good place. Maxie is disappointed when she learns the truth about Kate’s past. 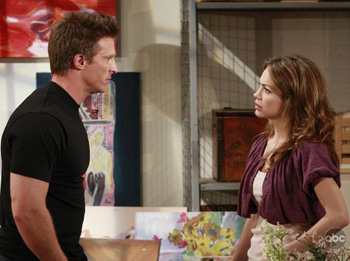 Robin reaches out to Matt on Monday, September 22.

Ric realizes Claudia is trying to use him so she doesn’t look bad in Nikolas’ eyes on Wednesday, September 24.

Elizabeth is ecstatic when Jason asks her to go to Italy with him on Thursday, September 25.

All hell breaks looks at Sonny & Kate’s wedding. Anthony reveals his sinister plan to Ric. Nikolas and Nadine take things to the next level. Johnny tells Anthony what he’s been waiting to hear. Olivia’s major secret is revealed. After swearing revenge against his enemies, Sonny tells Jason he wants the business back. Robin asks Patrick the big question, is a marriage on the horizon for Scrubs?