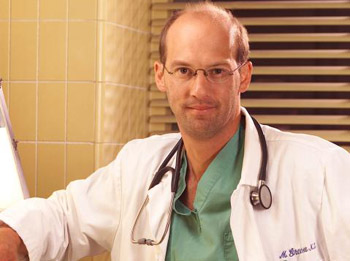 Golden Globe winner and Emmy nominee Anthony Edwards (Dr. Mark Greene) will return for one episode of ER. Edwards, an original cast member of the long running hit series, will appear in the episode “Heal Thyself” which will air on November 13, 2008.

Anthony Edwards Returns To ‘ER’ For One Episode
BY: Trish Mahon
NEWS EDITOR

NBC is pleased to announce that Golden Globe winner and Emmy nominee Anthony Edwards (Dr. Mark Greene) will return for one episode of ER. Edwards, an original cast member of the long running hit series, will appear in the episode “Heal Thyself” which will air on November 13, 2008. Edwards spent eight seasons on the show before leaving in 2002.

The episode will feature Dr. Greene in a series of newly shot scenes that will feature other characters from the show’s past while also giving insight into Dr. Banfield’s (Angela Bassett) past and her experiences within the walls of County General. "We had hoped to bring back some of ‘ER’s’ stars for the final season and think that our loyal fans will enjoy seeing some of the shows most beloved and memorable characters," said executive producer John Wells.

Noah Wyle is set to reprise his role of Dr. Carter for at least one episode this season. Wyle’s John Carter quickly became a fan favorite. Shane West (Dr. Ray Barnett) is also returning this season.  After George Clooney (Doug Ross) left, he made a surprise return to whisk away his love Carol, played by Julianna Margulies. No word yet if the two will return, but fans have been clamoring it.

ER is set to premiere its final season on September 25, 2008. ER is a production of Constant © Productions and Amblin Television in association with Warner Bros. Television.
TVSource Magazine will bring you weekly coverage of ER after the season premiere episode.

Ryan White-Nobles is Editor-in-Chief of TV Source Magazine. He's began covering entertainment and soap operas in 2005. In 2009 he co-launched Soap Opera Source, and led the TV Source rebrand in 2012. He's a natural #Heel who loves a spirited debate and probably watches too much TV. Follow him on Twitter at @SourceRyan to discuss all things TV, soaps, sports, wrestling and pop culture.

Redemption. Rebirth. Renewal. The CW has unveiled new Riverdale key art ahead of the show’s…

The final chapter is one hell of a ride. Netflix just debuted the official trailer…