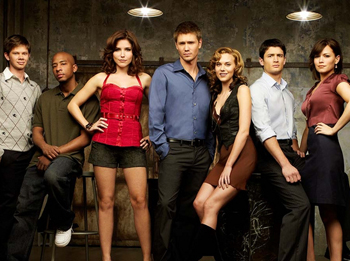 Several outlets have claimed this season is the “make it or break it” season for The CW, and it seems to be making it.

Several outlets have claimed this season is the “make it or break it” season for The CW, and it seems to be making it. The networks top three drama’s have all performed well. Gossip Girl brought in more people than ever had before, One Tree Hill got double digit gains in the ratings from last season, and 90210 gave the network some of its highest ratings to date. Even though the three have dropped from the start of the season, they are all holding steady and doing well.

So well in fact, executives over the network have extended the seasons of the shows from the standard 22 episodes to 24 for 90210 and One Tree Hill. Gossip Girl got an additional episode order bringing its total for the season to 25. Those of you that remember FOX in the 90’s may recall that shows like Beverly Hills, 90210 and Melrose Place often had 24+ episodes a season.

Perhaps the CW should think about showing series in off seasons. Gossip Girl & 90210 both got spectacular ratings at the start of the season, and no doubt some of that had to do with the two shows kicking off weeks ahead of other network’s lineups.

Oh, and speaking of Melrose Place the network seems interested in taking on a new version of that show as well. For more on that, click here