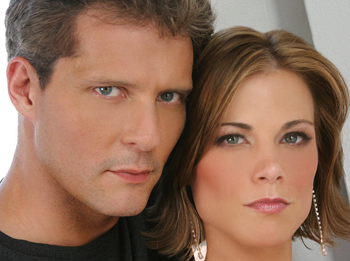 Shayne and Edmund form a partnership

Mallet reveals the truth about his past to Marina.{/xtypo_sticky}

For The Love Of A Child

Reva refuses to let Dinah leave the Bauer cabin. Dinah decides to leave but she collapses at the door. Reva panics, and sets off the security system alarm.  Jeffrey and Josh figure out where Reva is and rush to the cabin. The paramedics arrive and bring Dinah to the hospital. Reva ignores Jeffrey and Josh and goes to look for Edmund. Edmund is with Shayne, trying to get him to open up about Lara. Shayne begins to confide in Edmund. Edmund pleads with Shayne to tell him how Lara died. Shayne is about to tell Edmund when Reva and Josh find Shayne and tell him what happened to Dinah. At the hospital, Dinah warns Shayne about Edmund. Edmund decides to stay in Springfield until he finds out about Lara and Shayne’s relationship. Josh offers Shayne a job at Lewis construction, but Shayne doesn’t accept it yet.  Dinah asks Jeffrey why he trusts Edmund.  Jeffrey tells Dinah that if Edmund does anything wrong, he will nail him.  Reva stares at her sonogram and catches Edmund behind her. Reva tries to hide the picture, but Edmund has seen it.  Edmund grows emotional thinking about Lara and Reva grows sympathetic. Edmund invites Shayne out so that he can discuss a project with him.  Edmund wants Shayne’s help in building a hospital in Lara’s name. Jeffrey tells Reva that Shayne is joining Lewis, but Reva doesn’t believe him. Josh offers to take Edmund to the hospital, but Edmund says that he is staying in Springfield and that he and Shayne will be working together. Dinah sees Shayne’s sketches and begs Shayne not to work for Edmund.

Alan tells Doris that people think Emma is being raised by lesbians. Doris decides to call a press conference describing Emma’s non traditional family. Olivia and Natalia watch the conference on TV and Natalia is mortified. Olivia confronts Doris and explains that she is not in a lesbian relationship, but Doris doesn’t believe it. Olivia reminds Doris that Natalia saved her life. Doris is unmoved and Olivia angrily leaves.  Natalia and Frank head out for another date when Natalia gets a call; Emma is missing.  Natalia and Frank find Emma, who is upset that her friend Derek’s mother won’t allow her to be friends with Derek. Natalia and Olivia comfort Emma.  Olivia decides that the three of them should have a special day together.  The three of them are observed by a couple of town gossips.  Olivia notices them ad confronts them.  Natalia gets in the middle but gets too upset and flees.  Natalia goes to see Frank, who invites Natalia away for the weekend.  Natalia agrees to go.  Olivia flirts with a man at Towers, but when he asks for her number, she hesitates.

Heading For A Heartbreak

Blake throws a surprise party for Coop’s new book.  Coop is furious.  Frank tells Coop that he better get in touch with Beth beforehand, but Beth doesn’t answer the phone. As Coop reads from the book, Alan and Beth walk in.  Alan is humiliated.  Coop learns that Beth hasn’t told Alan about them.  Alan asks Beth to go for a walk with him.   Buzz and Frank worry for Coop, but Coop isn’t worried at all. Alan tells Beth that he knows.  Alan demands that Beth marry him immediately. Beth tries to reason with Alan but Alan refuses to listen.  Alan tells Beth that he will harm Coop if Beth doesn’t marry him immediately.  Coop is asked to join the Stanford University creative writing program.  Coop goes to tell Beth about his news and that she got into Stanford Law.  Beth, feeling guilty, tells Coop she can’t go with him. Buzz figures out that Alan knows the truth about Coop and Beth.  Alan makes Buzz a deal.  Coop goes away, Company goes National. Buzz turns him down. Buzz sees Coop tearing his book up.  Buzz tells Coop that Alan knows everything and is forcing Beth to leave him.

Christina wants to know what Remy knows about her acceptance into John Hopkins.  The two share an emotional moment when Remy refers to Christina as his girlfriend.  They are interrupted when a call from Johns Hopkins telling them that there is no scholarship for her, but that there may be a grant for her. Christina is angry and runs off.  Remy asks Mallet and Marina if he can borrow their house and arranges for the financial aid officer to meet them there.  Christina arrives and Remy tells him his plan.  Remy is touched to hear Christina discuss her love of medicine.  Mallett and Marina discuss adoption.  Marina is ecstatic but Mallet is worried because of his past work experience.  Mallet leaves a  portion of his employment history out and the agency begins to question it.  Marina is confused by this and wonders why Mallet is avoiding the phone calls from the agency. Mallet finally reveals to Marina that he is scarred that his past with Griggs will hurt him.  Marina walks away, but the two meet up at the adoption agency. Marina forgives Mallet and tells the agent that Mallet won’t be a bad parent.

Grant Aleksander returns after a 4 year hiatus as Phillip Spaulding…but don’t expect his homecoming to be met with open arms. Buzz seeks vengeance against Alan.