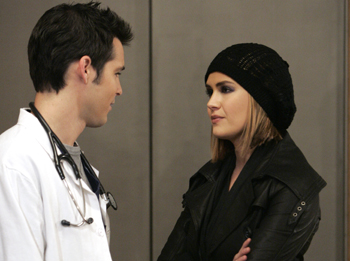 Unless you’ve been living under a rock, not watching soaps or keeping up with soap news (or all three), you should know by now that Emmy Winner Natalia Livingston (ex-Emily) recently made her return/debut to ABC’s flagship serial drama, General Hospital. Until now, we’ve seen Rebecca in the background not saying a word. Today viewers were in for a surprise as the leather clad, mascara wearing Rebecca finally spoke. Apparently chewing gum, bad posture and wearing leather totally makes you badass in Port Charles. Somebody should inform Jason Morgan — he stands entirely too erect. Check out Natalia (as Rebecca) interacting with Jason Cook.

Rebecca is looking for a job at the hospital and runs into Dr.Matt Hunter. He shamelessly flirts, she chews her gum and plays the "I’m so not interested" role. Conveniently Emily’s former BFF Elizabeth just narrowly missed seeing Rebecca twice. We’re not quite sure to make of Rebecca just yet but it’s nice to see Natalia back on our screens. Now if only the writers could get behind a Jason and Rebecca pairing. We have a feeling the "Lace and Leather" team of Reason (yeah they already got a name) would really kick ass. Fans would eventually get used to the sight of Jason with Rebecca right?