Claudia’s life is at stake when Anthony holds her hostage; Maxie dreams of what life in Port Charles would have been like if she had died and BJ had lived. 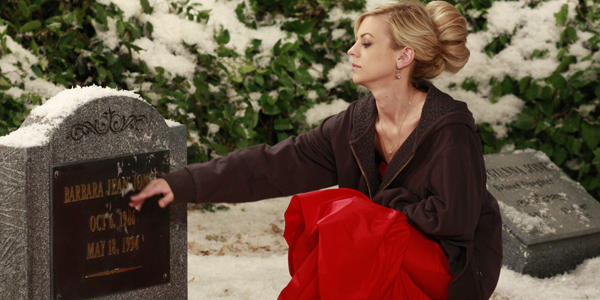 Jason tells Sonny, he’s willing to give back the business to him and return to being just an enforcer, but not until Spinelli is cleared of all charges. Sonny turns down Ric’s offer to help him run the business. Sonny gets a lead as to the whereabouts of Anthony and sends Jason and Sam to Florida to track him down. Jason and Sam pose as newlyweds when they reach the tropical resort. To find Anthony, Sam cons one of the resort’s staff to tell her where he is.

Back in Port Charles, Sonny orders Spinelli to freeze all of Anthony’s money. Spinelli will only take orders from Jason, but Claudia convinces him to do as Sonny asks. When Sam and Jason search Anthony’s room, they discover he’s already a step ahead of them, meanwhile, Anthony holds Claudia against her will and threatens to kill her. Anthony pushes Claudia’s buttons about her feelings for Sonny. Sonny is worried about Claudia and later tells Bernie, he’s back in charge of the business. Sonny tells Jason he will kill Anthony to save Claudia. Anthony continues to taunt Claudia. Anthony gives Sonny a choice, either grab him or save Claudia, but he cannot have both.

Maxie’s dream turns into her nightmare as she drifts off into an alternate universe where everyone’s lives are turned upside down. In her dreams, Patrick is unhappily married to Carly, and her Uncle Mac has taken up drinking and has become an alcoholic after her untimely death. Meanwhile, Robin has become a lonely spinster who still is mourning Stone, and Johnny has become a underhanded and dangerous mobster. Maxie is relieved when she wakes up from her nightmare in Spinelli’s bed, glad to be alive.

Rebecca visits Wyndemere and is taken back by the story Nikolas tells her about his life with Emily. Lulu and Spinelli are not happy when Kate is impressed by Maxie and Johnny’s presence at the gala in Manhattan and wants them to continue to attend parties together to promote Crimson. Jax and Carly enlist Olivia to help in finding out the truth about Lady Jane’s new beau. Maxie’s dream has everyone’s lives turned upside down. Rebecca finds it easy to be around Lucky. Tracy lets Luke rot in jail but posts bail for Ethan. Robin tells Patrick, she wants to hire a nanny so she can return to work at GH.

Claudia faces off with Kate on Monday, February 23.

Maxie has a dream in which she sees how life would have played out if she had never received her heart transplant and her cousin BJ lived on instead of her on Tuesday, February 24.

Jax sets out to prove that Percy is just after Lady Jane’s money on Wednesday, February 25.

Jason is impressed by Sam’s resourcefulness on Thursday, February 26.

Spinelli’s troubles are far from over on Friday, February 27.

Jason faces a difficult dilemma. Sonny races against time to try and rescue Claudia. Nikolas tries to get closer to Rebecca. Johnny tries to persuade Claudia to distance herself from Sonny. Jason confides in Sam. Rebecca sees Nikolas in a new light. Nadine calls it quits with Nikolas. Spinelli takes matters into his own hands. Lulu has a bad feeling about Ethan. Tracy doesn’t take Rebecca at face value. Patrick is frustrated by Robin’s behavior. Claudia is full of surprises. Claudia makes a slip in front of Sonny. Spinelli and Winifred go on the run together. Luke advises Rebecca to walk away from Nikolas.