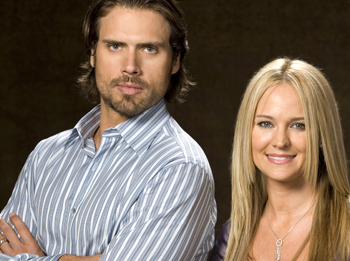 This Week on “The Young and the Restless”

Noah is rescued however; Brad is nowhere to be found. Colleen begins to worry when Brad misses a dinner with her. Feeling anxious, she calls JT for help. Even though JT and Victoria are having a romantic evening, JT goes with Colleen to help her. Near the cabin, they find Brad’s abandoned car. Brad’s cell phone and keys are still in there. The two call the police. Paul helps organize a rescue party. Colleen takes her worry out on Victor, who offers to help. All of Brad’s loved ones gather together to wait for word on Brad. Meanwhile Sharon, who is up at the cabin, has no idea that Noah had fallen through the ice. Nick tries to call her to no avail. Even though it is very icy out, Nick decides to drive up to the cabin to get Sharon. Phyllis gets angry at Nick. Phyllis confides in Jack about her fears regarding Nick.

Nick arrives safely and tells Sharon what happened. As they get ready to leave, they discover that the roads are closed. Nick and Sharon discuss their fears as Noah’s accident reminds them of Cassie’s accident. Nick finds Sharon’s letter to him. The two make love. Michael is upset because he feels he is a bad parent. Eden hears Michael and the two have an emotional moment. Kevin and Amber will stop at nothing to prove that Katherine is who she says.

Phyllis tells Jack that she is going after Nick when he goes to find Sharon on Monday, February 2nd. Will Jack stop her?

JT delivers the news about Brad to Brad’s loved ones on Thursday, February 6th.