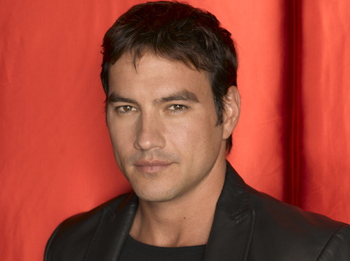 This week, Lucky and Nikolas face off regarding Rebecca.

During the mob summit meeting, Jason tangles with Ric with the intention to spill Ric’s drink on him to expose the wire he is forced to wear. Raynor is furious with Jason and threatens to arrest him and Spinelli. Ric tips his hand to Claudia and reveals he has one of the incriminating DVDs from Jerry that exposes her involvement with Michael’s shooting. After Ric puts her on the spot, Claudia doesn’t hide the fact that she has dislike for Ric but tells Sonny, Ric should be given a more powerful position in the organization to keep an eye on him. After Sam destroys the evidence against Spinelli, Raynor has no hold on Jason and Spinelli, but vows he will find something and bring them down.

Ric steps up and offers Raynor a deal he cannot refuse, but Raynor wants more. He wants Ric to find evidence to bring down both Jason and Sonny. Ric sets out to blackmail Claudia. After Ric makes her believe he will expose her to Sonny, Claudia hatches her own plan for Ric. Ric tries to get in Sonny’s good graces by telling him about a possible assassination attempt. Jason not wanting to trust Ric, Sonny assures him that he’s sure Ric has deeper intentions then he’s let on. Claudia finds herself between a rock and a hard place when Sonny is about to stumble upon an unconscious Ric in her room.

Robin is enjoying the time she is spending with Brad in Rochester. Patrick arrives at the motel to confront Robin and sees what he believes is Robin kissing another man. Patrick returns to PC and confides in Elizabeth as to what he saw. When Robin returns home, she admits to Patrick she is suffering from PPD, but omits telling about Brad. Robin invites Lainey over and tells Patrick about the visit, but he doesn’t believe Lainey knows the real reason Robin invited her. Robin is hesitant to tell Lainey the entire truth and bolts. Later she encounters Jason on the docks and breaks down in his arms. Patrick and Robin seemingly are back on the right track as Patrick vows she will have all the support she needs as she promises to seek therapy. In another encounter with Jason, Robin confides him while Patrick vents his feelings to Sonny. Later, Patrick implies there is more that Robin is not telling him.

Sam gets caught when using Raynor’s ID to gain access to the FBI’s files. Jax is unsure about telling Carly what he found out about Michael’s shooting. Rebecca sees Nikolas and Lucky arguing about her. Winifred is forced to resign from the FBI. Spinelli has ideas of he and Winifred in joining Sam in her PI business. Rebecca is nervous about her tests and is comforted by Nikolas. Jax admits to Carly about Jerry being alive but doesn’t tell her everything, later he apologies to a comatose Michael.

Jax feels guilty for not telling Carly what he’s learned about Michael’s shooting on Monday, March 23.

Nikolas and Rebecca later share a friendly chat at the hospital but Nikolas is shocked to learn she’s there for a mammogram on Wednesday, March 25.

Tracy confronts Luke for the scam he and Ethan are trying to pull on Edward on Thursday, March 26.

Nikolas is there for Rebecca when she receives alarming news after having an ultrasound performed at the hospital on Friday, March 27.

Claudia dodges a bullet. Rebecca accepts Nikolas’ offer of help. Lulu catches Maxie and Johnny in a lie. Carly has renewed hope for the future. Rebecca makes a mysterious call. Maxie flirts with Ethan, much to Lulu’s annoyance. Claudia admits to Johnny that Ric’s blackmailing her. Kate urges Olivia to come clean with Sonny. Robin makes a painful confession during therapy. Claudia comes up with a new plan to try and save herself. Olivia encourages Jax to tell Carly the truth. Lulu gives Ethan a taste of his own medicine. Claudia puts her plan in motion. Robin’s condition takes a life threatening turn. Carly’s torn over how to proceed with Michael.