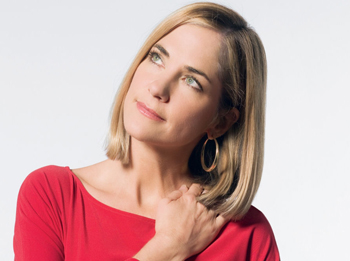 John puts together some pieces for Blair about the attack.

“I’m going to keep you safe.” Blair awakes from her coma, but she doesn’t remember her attack. Starr and Addie are overjoyed, and John is contrite. John tells Blair how Dorian found her after the attack, and apologizes for leaving her alone and promises he’ll keep her safe, now.

“I’ll share my life saving bone marrow with your son if you give me your boyfriend.” Stacy tricks Gigi into thinking her bone marrow is a match for Shane’s, and agrees to help Shane if Gigi ends her relationship with Rex. Stacy explains that Rex is her destiny, and they would be together if Gigi hadn’t stolen him. Michael informs Rex and Gigi that a donor has been located from the international registry, so Gigi tells Stacy off before learning that the donor isn’t going to work out, and then she has to backtrack. Roxy recalls Stacy blackmailing her.

“My acute pain over your suffering is so severe, I must medicate to endure it.” Matthew pleads with Nora to take it easy on Cole. Nora offers Cole a deal that will keep him out of prison and includes drug counseling. Cole, who is still popping pills gets Asher’s help to pass the urinalysis. Matthew faces life in a wheel chair.

John and Marty piece together the significance of the letters “KAD” discovered on the murder victims’ bodies. It’s the fraternity her rapists belonged to back in college. Natalie and Jared’s suspicions are confirmed and they agonize over what they should do next, and how their discovery will have many painful repercussions. Tea fights Cole’s legal battles, and opposes Todd in his quest for custody of his children.

Antonio’s family gathers to say goodbye, as he leaves Llanview to track down Carlo Hesser on Wednesday, March 25.

Jessica asks Natalie and Jared to be Chloe’s godparents, and Tea has a tricky plan to help Blair keep custody of her children on Friday, March 27.

John has an unpleasant surprise for Marty. Todd vows to get even with Tea, then tries to use her feelings for him against her. Gigi goes to extreme measures to make Rex stop loving her. Jessica shows up to tell Brody how she feels, but her timing couldn’t be worse. Todd is being watched. Tea and Ray go on a date, and Dorian is jealous. Things get heated between Cris and Layla.