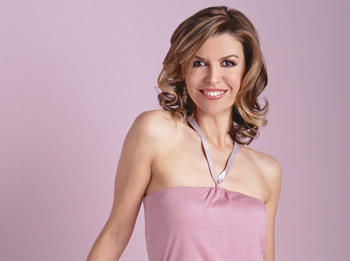 Finola Hughes discusses her primetime and daytime roles as well her latest project on The Style Network airing in March.

TVSource Magazine recently spoke with the lovely Finola Hughes regarding her new series on the Style Network, Running in Heels, and her time she spent on ABC’s All My Children, General Hospital, and its primetime spin-off General Hospital:NightShift.

TVSource Magazine: Going back to your earlier years in your career, you landed a role in a film called Stayin’ Alive with John Travolta. What was that experience like for you?

Finola Hughes: That was fantastic I have to say. John is a lovely man, he’s just an extraordinary person. He was incredibly kind to me, it was my first time in a America. He took me under his wing, showed me the ropes, and he was just lovely. As an actor, as a person, just everything. We had a lot of laughs when we were working together.

TVS: You had appearances on numerous prime time/sitcoms, but many remember you as Patti Halliwell on CHARMED. Did you enjoy working with the supernatural elements on the series? What was it that made you take on the role of the mother of the Charmed Ones?

FH: I had worked with Aaron Spelling on a show called Pacific Palisades, and I had a terrific experience working with him and he was just a great man. I had become quite friendly with those on his production team, so when they had decided to bring on a mother to these three girls, they asked me to come and play the part. When I moved to New York to shoot All My Children, then I wasn’t able to go on the show as often as if I had remained in Los Angeles. I loved working with those girls, those girls are super talented and super funny. Shannon, Rose McGowen, all of them, because I got to work with all four of them.

TVS: You joined All My Children as Anna Devane and then took on the role of Alex, Anna’s twin sister. How challenging was it for you to take on the dual role?

FH: It just didn’t feel very natural for me, I know some brilliant actors continue to do it like David Canary. For me, honestly what happened for me was I became the closest to being Finola in playing Anna. I didn’t have anywhere to go, I felt like I was cheating. I couldn’t get into 2 characters at one time. So I was being in a character the ultimate to that was to be me. I couldn’t get into that all. I guess I’m not equipped to play the dual roles, me as an actor I found it very difficult. I felt like I was faking it all the time, it was very challenging. When Alex went off to Budapest, I was happy remaining as Anna and I was able to delve into Anna a little more.

TVS: You returned to GH on their spin off show, Night Shift and joined your on screen daughter Kimberly McCullough and her on screen father, Tristan Rogers. What made you come back as Anna Devane on Night Shift? How was it working with both Kim and Tristan again?

FH: That was really enlightening and inspiring. I felt great freedom because there was so much back story. It’s such a great gift when you’re able sit on all that back story and go from there. And really Tristan and I explore what could have been with these two characters, if they just allow themselves. Sri Rao that was his jumping off place, he wanted to go straight from what could have been for these two characters. And the circumstances allowed us to do that. Robert being sick allowed us that sort of “we’ve got no time left, let’s just say everything” moments. I really enjoyed it. We have such a connection, the three of us. For three of us to walk on set, it’s all so unspoken. We are just able to springboard and it’s just a lovely feeling. It’s interesting to have Kimberly now as a supportive element where as when she was growing up, Tristan and I kind of supported her as a little girl. Now, as an actress, she guides and she’s such a strong actress and it’s really lovely to experience that.

TVS: Have you been following GH? If so, what are your thoughts on Kim’s new storyline regarding Robin having post-partum depression?

FH: I haven’t spoken to Kim about it. I think it’s interesting and relevant a lot of women experience it. It gives her something to play.

TVS: How much did you enjoy working with John Reilly and Sharon Wyatt in Robert’s dream sequences?

FH: That was great. I stayed in touch with John, it was really lovely. Nothing felt any different. You built such connections in formative parts of your life, you really understand each other. When working on soap operas you are very much a family when working together and that never changes.

TVS: You’ve done primetime, daytime, film and stage. They are all different; do you find it challenging to go from one genre to another? Do you have a preference?

FH: I really love night time episodic, more than film. Films take quite a long time. Theater I love, now at this stage, I get a bit more nervous about it. I just feel like episodic you’re able to discuss things, you have more time to shoot it and I’m at this stage now, I actually would like to get a lot more guidance with my work. That was the nice thing on Night Shift, we actually had more time to we could discuss things, and the director had a lot of input and the writer had a lot of input and would talk with us. We had read through and I felt very cushioned and enveloped by the process. On a Soap Opera you have to create those environments and work very hard creating those environments. Sit-coms are a lot more open it’s a lot more like being in theater. At this stage of my life, I’d like to walk into a more cozy environment and get enveloped by it.

TVS: In 2005, you joined the Style Network and became the hostess of the series How Do I Look? How did that come about?

FH: I kept going and knocking on their door and I kept saying to them I need to work here, had these ideas. I think it was on my 12th visit, they told me they had a show and you seem to be the right person for this because you’re so passionate and so forceful. It was really a shoe in for me, as soon as I read the idea and how they were going to go about it and I loved the whole intrusive element. We shot for 4 years, and it was a wonderful way to get into women’s lives and to find out about women.

TVS: Your new show Running in Heels premieres in March. Tell us about the show and your involvement.

FH: I’m a producer on it. It all takes place at Marie Claire and we get to see the Editor-in-Chief at work, the fashion editor. There are three interns that start at the beginning of the episode they are hopefully going to get a job at the magazine. They all live together in the same apartment, and we watch their dynamics of their relationship. It’s really a guilty pleasure.

TVS: Besides hosting the new series, you have many other things going on in your life, including becoming eco-friendly. Has being environmentally conscious always been important to you?

FH: Since I married my husband, he’s been a member of Green Peace for the last 20 years, so he’s very versed in the environment. Since I married him we’ve been growing vegetables and using natural products in our home. We’ve built a home from scratch, as eco as we can make it. There is just a lot of ways each person can make a difference. Once you become aware, it’s impossible for you to act any other way.

TVS: Are there any other projects coming up for you?

FH: I’m hoping to produce some more shows and those are in the works. I have a lot of great relationships with different networks and that’s being quite fruitful.