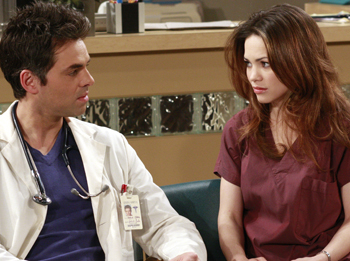 Patrick and Robin’s problems continue to grow as misunderstandings and frustrations take place. 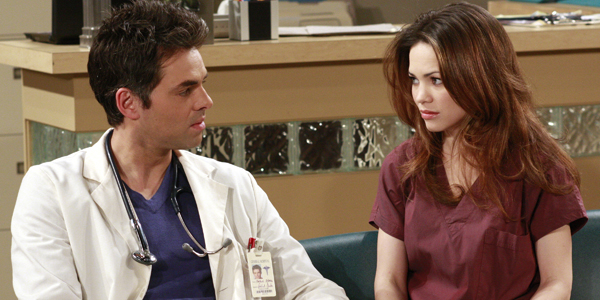 Patrick discovers Robin in the water and rescues her. She is taken to the hospital where Patrick, Matt and Maxie worry it was no accident, but Robin insists she didn’t try to kill herself. Patrick faces off with Robin over the prescription she ripped up. The two argue over her taking the medication prescribed by the therapist. Patrick convinces Robin she needs to take the medication to get well. Robin is not happy with Patrick when he brings Dr. Brown to her room for a therapy session. Later, Robin leaves the hospital and encounters Jason down on the docks. Patrick follows Robin to the docks and is witness to an embrace between she and Jason. The strain between Robin and Patrick continues to grow. Robin decides to take Kelly’s advice and she calls Patrick to meet him in the park with Emma. Mercedes tells Robin, Patrick took Emma on an outing to the park. When Robin arrives at the park, she sees Elizabeth with Patrick, spending quality time with Emma. A distraught Robin flees the park without being seen by Elizabeth or Patrick.

Maxie gives Matt the brush off when he gets flirtatious. Lulu suggests Maxie go to the next gala with Matt instead of Johnny. Maxie doesn’t like the idea of taking Matt and says she’ll take Ethan, much to Lulu’s protests. Kate decides Matt and Maxie should attend the event together and Lulu feels relieved, until Ethan insists she follow through with her promise to him. Lulu tries to convince Kate to send Matt and Maxie to all of the charity galas, and Maxie vows revenge. Johnny confesses to Lulu he almost slept with Maxie. Lulu is devastated and they decide it’s over between them.

After Rebecca’s procedure, Nikolas caters to her every need. Ric is caught hiding in the darkness at the warehouse and Jason threatens to kill him if he’s hiding information about Michael’s shooting. To help out Sam and Spinelli, Jason convinces Bernie to allow the PI office to be named after him. Tracy discovers a worn photograph of Luke and Robert and begins to wonder why Ethan is holding on to it. Carly and Jax bring in a specialist from Europe to consult on Michael’s treatment. Rebecca visits with Monica about surviving breast cancer. Later, Nikolas takes Rebecca to the casino for a fun night out. Claudia has a consultation with Kelly, which interests Carly when she sees them together at the hospital. When confronted by Jason and Sonny, Ric lays blame at Claudia’s feet. Carly has a dizzy spell, not once but twice. Olivia wonders if Carly could be pregnant. Tracy is not at all pleased with Ethan showing interest in Lulu. Nikolas and Rebecca kiss.

Matt flirts with Maxie, who claims she wants nothing to do with him on Monday, April 6.

Tracy tells Ethan she suspects he has a hidden agenda on Thursday, April 9.

Johnny devastates Lulu with his confession on Friday, April 10.

Spinelli is heartbroken when he sees Maxie and Johnny kissing. Ric fingers Claudia as Ian Devlin’s accomplice in Michael’s shooting. Carly receieves devastating news from Dr. Kelly. Tracy’s suspicions of Ethan being Luke’s long-lost son grow stronger. Carly confides in Olivia. The tension between Robin and Patrick hits an all-time high. Constance Towers returns as Helena Cassadine on Tuesday, April 14. Nikolas is shocked when Helena makes an unwelcome appearance. Alexis warns Nikolas that Rebecca might not be what she seems. Jerry makes it clear to Ric and Claudia that he’s calling the shots. Nikolas wonders if Alexis could be right about Rebecca’s connection to Helena. Robin and Patrick try to work things out. Jax comes face to face with Jerry. Carly takes a pregnancy test. Maxie is hurt by Spinelli’s rejection.