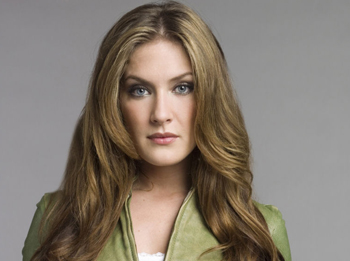 A tragic end for Talia.

John discovers Talia’s body floating in Dorian’s pool. Fish tries to cut John a break, but John insists he has to play by the book, and the mayor forces Bo to charge John with murder. Tea represents John, and they discuss who is framing him. They think it could be Todd, but John isn’t convinced. Todd sees John’s arrest as the perfect opportunity to get his kids back. Tea kisses Todd to stall him from seeing the judge and their passions erupt. Marty fires Tea as John’s attorney when she realizes she had sex with Todd. Antonio says goodbye to Talia, then frees John so he can find the real killer. John shares a tender goodbye with Blair before he goes on the run – with Marty! The killer is closer than John and Marty realize.

And Blood Will Tell

Schuyler sees Stacy toss something suspicious in a bio-hazard receptacle. He takes the chance and retrieves it only to discover it’s a bag of her blood. After Shane’s transplant appears to be successful, Gigi is on the verge of telling Rex the truth, but Shane suffers a distressing, although temporary, setback, after which Stacy reminds Gigi of the bargain she made with God. Schuyler busts Stacy with what he knows. Roxy gets a shock when she visits John Doe. She later convinces Gigi to spill the beans, but Gigi spies Rex and Stacy in what seems to be an intimate embrace. Kyle agrees to keep Roxy’s secret in exchange for a free room at the Angel Square Hotel.

Viki confronts Todd about his feelings for Tea. Todd sees John’s arrest as the perfect opportunity to get his kids back. RJ surprises Tea in court and Todd shows up as well. Cole and Rachel have their first meeting and Lola, intent on paying back Markko, exposes that Markko helped Cole fake the drug test. Rachel confronts Cole and he’s honest with her. Rachel is tough, but she agrees not to send Cole to prison, and he turns over his drugs to her. Later Nora and Rachel argue because Nora’s not pleased that Rachel is Cole’s counselor. She’s even more disturbed to learn that Cole broke the conditions of their plea bargain and leaves Rachel with a difficult decision. Christian and Layla comfort each other over the loss of their friend, Talia. Cole and Starr ask Kyle to run a DNA test on Hope’s hair. David and Dorian agree to part. Ray asks Dorian on a date.

Bo and Nora are devastated to learn of Talia’s death and Roxy pays a visit to Rex’s father on Monday, April 20.

Viki knows Todd has feelings for Tea, Lola vows revenge, and Cristian breaks the news of Talia’s death to Layla on Tuesday, April 21.

Antonio wants John to find justice for Talia and Cristian and Layla comfort each other on Wednesday, April 22.

John kisses Blair goodbye, RJ surprises Tea, and Cole and Starr wonder how they proceed to find the truth about Baby Hope’s death on Thursday, April 23.

Brody tries to tell Jessica he still has feelings for her and John and Marty go on the run with the killer close behind on Friday, April 24.

Brody makes things right with Jessica and they move to the next level. Starr tries to help Cole through withdrawal, but she has to leave when things get to their worst. John makes a discovery and seeks answers from Viki. Bo and Nora draw closer but can they handle it? Todd and Tea continue to cross swords.