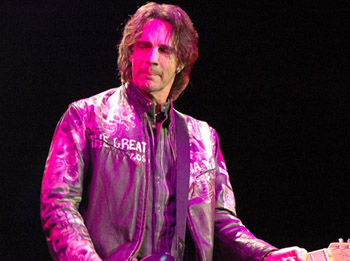 80’s rocker turned soap star Rick Springfield is taking on a new role on the upcoming season of the hit Showtime dramedy Californication. The actor will play himself for a 4-episode arc, a role described as “an actor who experienced huge fame in the 80’s to play themselves as a now down-on his-luck-ex-celebrity waiting tables to get by.”

In the early 80’s, Rick Springfield was enjoying the success of his number one single "Jessie’s Girl," and rising to popularity as a heart throb on the very popular ABC soap General Hospital. Years later, the Grammy winner is still enjoying success as a musician and actor. Springfield was asked to return to GH in 2005 after a 23 year absence. Since then, the actor has put in recurring appearances as Dr. Noah Drake, in which Noah has struggled with his alcholism and attempts at forming relationships with estranged sons Patrick Drake (played by Jason Thompson) and Matt Hunter (played by Jason Cook). Last summer, he performed his single "What’s Victoria’s Secret" on the series as Eli Love, a rock star who looks just like Noah.

Californication stars X-Files alum David Duchovny as Hank Moody, a troubled, womanizing novelist living in California struggling with his personal demons. The series also stars Natascha McElhone as Karen – the on again, off again girlfriend of Hank, and Madeleine Martin as Becca, Hank’s daughter. The third season of Californication will air this fall.