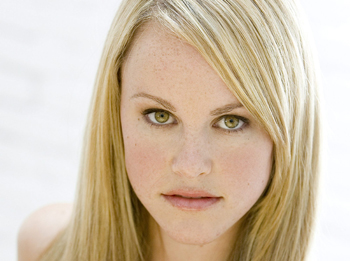 Lulu lashes out at Jason and Sonny because of Dante.

A LIFETIME OF LIES

Sonny’s horrified to realize he’s shot his own son. Olivia and Sonny work feverishly to keep Dante alive until the paramedics arrive. Lulu fears the worst has happened when Dante and Sonny are no-shows at Josslyn’s christening. She makes a horrifying discover when she goes to Sonny’s looking for Dante. Olivia overhears Sonny telling a barely conscious Dante that they are father and son. She unleashes on Sonny for telling Dante the truth. Dante is rushed to the hospital, where Johnny stands by Olivia who is holding vigil for her son. Lulu stuns everyone at Josslyn’s party where she lashes out at Jason and accuses Sonny of shooting Dante. She leaves the party and goes to the hospital where she rips into Sonny.

Jason insists that Sonny leave the country to escape being arrested, but he refuses to leave Dante. Luke, Carly and Ethan gather around to support Lulu. Lulu is by Dante’s side when he awakes from surgery. Dante believes he was dreaming when he heard Sonny claim to be his father. Olivia regrets not having told Sonny the truth about Dante when he first came to town. Lulu tells Dante he wasn’t dreaming and it is true that Sonny is his father. Dante takes his anger out on Olivia, accusing her of lying to him his entire life. Sonny makes it as far as the tarmac but can’t bring himself to turn his back on Dante and leave the country despite Jason’s protests. Olivia and Dante both lie to protect Sonny. Lulu has a hard time accepting Dante’s decision to cover for Sonny. Sonny is released from police custody and goes to visit Dante at the hospital.

Carly discovers a DVD from Franco among the gifts from the christening. Jason stops Morgan from playing the DVD Franco sent. Robin is shocked to learn that Patrick knew Dominic is really Dante, Sonny’s son. Michael confesses to Morgan, Kristina and Molly that he’s the one who killed Claudia. Robin remains angry with Patrick for not telling her the truth about Dominic. Carly walks out on Jax with Josslyn and Morgan in tow. Nikolas suspends Elizabeth after she has another meltdown at the hospital. Nikolas appeals to Lucky to reach out to Elizabeth but he refuses. Kiefer is abusive with Kristina, again.

Sonny tells a barely conscious Dante that they’re father and son on Monday, February 1. Sonny is arrested for Claudia’s murder on Tuesday, February 2. Sam makes a risky move and manages to steal the gun Sonny used to shoot Dante from the police station on Wednesday, February 3. Jax confesses his role in Sonny’s arrest to a stunned Carly on Thursday, February 4. Nikolas suspends Elizabeth after she has another meltdown at the hospital on Friday, February 5.
© 2010 TVSource Magazine. All rights reserved
Please credit TVSource Magazine and provide a link back if you copy & paste our spoilers