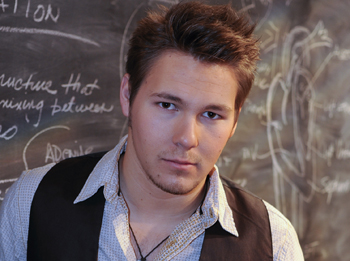 Schuyler’s having the worst week ever! Not only does he lose Gigi, but he’s facing jail time!

Don’t forget to vote for your favorite actor, actress and couple in the Pulse Poll beginning at 4pm!

Fish’s conservative roots are showing as he explains to Kyle that he believes Sierra Rose should be raised in a “normal” family, instead of by gay partners. Schuyler bowls Gigi over when he admits that he’s Sierra Rose’s daddy as the baby is prepped for heart surgery. Schuyler thinks they can work things out, but Gigi, sets him straight, and blasts him with a furious rant. Roxy encourages Rex to go to Gigi, and the former flames wait for news about Sierra Rose’s condition. Gigi finds Schuyler in the Chapel, and tells him Sierra Rose is out of surgery. Schuyler’s problems don’t end there. Greg tells Rachel that Schuyler is under suspicion for the missing oxytocin from the hospital. Rachel defends Schuyler, but later rifles through his backpack and discovers the empty vial. Rachel seeks legal advice from Tea, who informs her that Schuyler could face criminal charges if he induced labor and the baby was born with defects as a result. Rachel believes Schuyler’s denial that he used the oxytocin.

Snoop Dog performs at Capricorn on Wednesday, February 24. Dani and Matthew make out, but Matthew wants to wait to have sex when the time is right. Dani and Matthew’s parents aren’t pleased by their burgeoning romance. Dani bridles when Todd forbids her to go to the concert with Matthew, so Todd capitulates. Todd and Tea chaperone Dani and Matthew. Greg’s parents display obvious preference for Shaun’s date Vivian over Rachel. Langston plans to avoid Ford by babysitting Hope, instead of going to the concert backfire when Ford shows up at the apartment. Markko interrupts Langston and Ford when he returns early.

Shane wonders if Rex and Gigi will get back together. Clint rips into Kim when he hears her lashing out at Nigel but his compassion is stirred when she tells him that Stacy is dead. Brody wants Jessica tries to stir her memories, but his efforts fail. Jessica doesn’t recognize Natalie but she pretends to know Bree. Starr fights feelings of jealousy when she meets Hannah. John and Marty make-up. Natalie sees John kissing Marty. Jessica calls Cristian and when he comes to see her, she pulls him into passionate kiss. Blair resists Todd’s advances.

Schuyler announces he’s the father of Stacy’s baby as Sierra Rose is prepped for life-saving heart surgery on Monday, February 22.

Blair resists Todd’s advances because she doesn’t want to fall back into old habits on Tuesday, February 23

Snoop Dogg gets caught up with his old friend Bo and invites him, Nora and Matthew to his concert on Wednesday, February 24

Jessica agrees to kiss Brody but even that doesn’t trigger her memory of him, and Natalie’s affected when she sees John kissing Marty on Thursday, February 25

Roxy’s unsettled after visiting Mitch in prison. Mitch gets a visit from one of his disciples on Friday, February 26