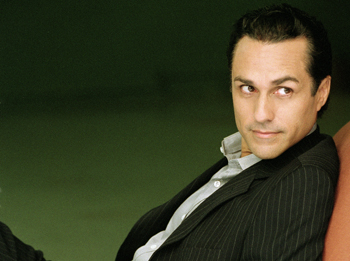 Sonny’s courtroom outburst may have sealed his fate.

Pulse Poll Rankings for Wk. of 3/15/10 |
Don’t forget to vote for your favorite actor, actress, and couple in the Pulse Poll beginning at 4PM |

Claire looks to Jax for advice after she witnesses Sonny’s tirade against Ethan. Johnny’s testimony causes Sonny to erupt with rage in the courtroom, quite possibly sealing his fate. Kristina rushes out of the courtroom in tears after witnessing Sonny’s outburst. Later, Sonny goes to see Kristina and she lashes out at him in anger. Dante encourages Carly to keep Morgan away from any cops, after Ronnie pressures him to question Morgan about Michael’s location. Johnny is thrilled after his testimony because he caused Sonny to lash out at him in front of the jurors. Dante has conflicted feelings when Johnny informs him of Sonny’s outburst in the courtroom. The judge decides to sequester the jurors in Sonny’s trial. Carly assures a questioning Kristina that she doesn’t believe Sonny would ever raise a hand against a woman. Meanwhile, Olivia tells Dante she wholeheartedly believes he didn’t inherit any of Sonny’s volatile side. Robin gives a glowing review of Sonny on the witness stand, but Claire forces her to highlight some of Sonny’s characteristics in a negative light. Sonny, Jason and Carly face the fact Sonny may go to prison for killing Claudia. Maxie gives her testimony from the hospital bed and mentions Michael. Michael learns from Kristina things aren’t going to well for Sonny.

Kristina is on the verge of telling Luke the truth when Sam arrives and interrupts him from questioning her. Alexis warns Luke to never go near Kristina again. Jason stops Sam from physically attacking Ethan when she sees him flirting with an attractive girl at Kelly’s. Sam’s hurt to realize Jason doesn’t take Kristina at face value but makes it clear she believes her little sister no matter what. Ethan insists on leaving town as he feels persecuted by everyone, but Luke makes a heartfelt plea to keep him in Port Charles. Dante observes a visit from Kiefer while he is questioning Kristina about her attacker. Tracy suggests to Luke they take Ethan out of town and he agrees, but after receiving a phone call, Luke tells Tracy he is staying behind in Port Charles. Dante and Lucky discover evidence that points to Kiefer as Kristina attacker and question him. Kiefer is shaken up after being questioned and goes to the lakehouse to see Kristina. As she returns home, Alexis sees Kiefer running from the house and is shocked by what she discovers inside the house.

Maxie has an out-of-body experience wherein she’s visited by Georgie, who says that the decision to live or die is in Maxie’s hands. Maxie chooses to live when she hears Spinelli express his love for her. Elizabeth feels she’s ready to come home, but Steve and Nikolas think differently. Elizabeth insists on leaving Shadybrook and Patrick takes her home. Helena arrives at Elizabeth’s just as she receives the results of the paternity test Nikolas had done at the independent lab. Maya Ward, Edward’s great-granddaughter, comes to Port Charles to live with the Quartermaines. Ethan and Maya get off to a scratchy start. Elizabeth discovers the second test has the same results as the first test, Nikolas is the father of her baby but she has no idea, Helena fixed the second test too. Luke’s dying to know why Skye returned to town. Lucky meets Maya.

Maxie has an out-of-body experience wherein she’s visited by Georgie, who says that the decision to live or die is in Maxie’s hands on Monday, March 29.

Johnny’s thrilled that he made Sonny fly into a rage in front of the jurors on Tuesday, March 30.

Maya Ward, Edward’s great-granddaughter, comes to Port Charles to live with the Quartermaines on Wednesday, March 31.

Dante and Lucky gather evidence that points to Kiefer as being the person who beat Kristina and question him on Thursday, April 1.

Sonny, Jason and Carly face the fact that Sonny is perilously close to being convicted on Friday, April 2.