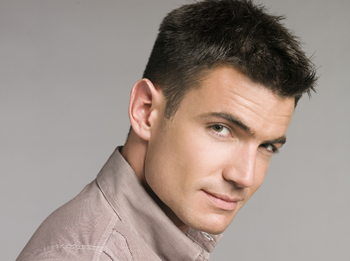 The cast of Dancing with the Stars season 10 was revealed last night during The Bachelor finale. This year there are fewer couples competing. There will be 11 total pairs. The cast of celebrity dance hopefuls are former All My Children star Aiden Turner, ESPN sports reporter Erin Andrews, original 90210 bad girl Shannen Doherty, Pussycat Doll Nicole Scherzinger, reality show mom-ster Kate Gosselin, astronaut Buzz Aldrin, the former VIP herself Pamela Anderson, Olympic figure skater Evan Lysacek, actress/hostess extraordinaire Niecy Nash, wide receiver/author Chad Ochocinco, and The Bachelor Jake Pavelka. 11 pairs will perform during the first two weeks of competition before the first elimination round takes place. The “Dance Off” where the two lowest-scoring pairs face off in freestyle will return for three weeks.

A former model, Turner originated the role of Aidan in 2002. The actor was shocked late last year when All My Children Executive Producer Julie Hanan Carruthers gave him his walking papers. The character of Aidan last appeared on the sudser in November. Ironically, Turner, who was not asked to make the move to Los Angeles with All My Children last fall, will now be traveling west since Dancing with the Stars is taped in front of a live audience in Los Angeles.
Born and raised in England, Turner’s television credits include the Australian television series Heartbreak High, the British soap East Enders and the MTV primetime soap Undressed. He was also featured in a music video with former Spice Girl, Geri “Ginger Spice” Halliwell. Turner was nominated for a Daytime Emmy as an Outstanding Younger Actor in 2003 for his work on All My Children. In 2006, Turner married Megan Marshall. The couple resides in New York City where they recently welcomed a baby girl named Ciella Larryn Turner, born on August 21, 2009.

Catch Turner and his partner, Edyta Sliwinska, on the new season of Dancing with the Stars, which premieres on March 22nd at 8/7c on ABC.

Netflix’s Partner Track premieres August 26. The ten episode series is based on the acclaimed…