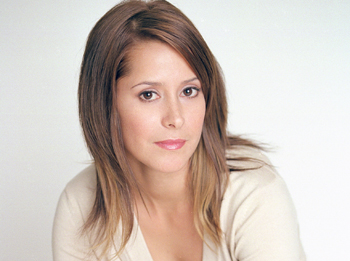 Patrick is unsettled by Robin’s memories of her time with Jason and Stone.

Pulse Poll Rankings for Wk. of 4/19/10 |
Don’t forget to vote for your favorite actor, actress, and couple in the Pulse Poll beginning at 4PM |

Lucky asserts his authority and turns Michael over to the police. Jason alerts Diane that Michael has been apprehended but she is denied access to Michael at the police station. Michael is led into the courtroom in handcuffs and gives testimony as to what happened the night Claudia was killed. The judge remands him to jail and will announce sentencing by the end of the week.

Carly lashes out at Lulu over her betrayal, saying that Lulu is blinded by her love for Dante. Dante doesn’t believe that Michael will serve any jail time for his part in Claudia’s death. Olivia confronts Sonny and asks him to leave Dante alone, he was doing what he thought was right. Luke tells Lulu there could be rough road ahead of her for standing by Dante. Carly and Sonny both share visits with Michael in jail. Spinelli tries to convince Jason that nothing will be for the better if he kills Dante. Both Jax and Jason struggle with the guilt they have over Michael’s situation.

Robin tries to soothe Jason’s guilt by telling him he’s always done right by Michael. Meanwhile, Skye tries to help Jax overcome the guilt he is feeling. After a romantic night with Lulu, Dante confronts Sonny about turning in Michael.

Both Dante and Sonny make emotional pleas defending Michael’s action to the judge. The judge hands down Michael’s sentence in a court room filled with spectators.

Helena tries to turn Nikolas further against his brother. Lucky insists Nikolas send Helena away for Elizabeth’s sake. Elizabeth feels her and Lucky’s future may be more possible than ever before while Helena tells Nikolas he may never see his child again if Elizabeth gets her way. Tracy becomes more and more suspicious of Helena and believes she’s up to something.

Patrick seems unsettled by Robin’s memories of Stone and Jason. Lulu and Dante make love for the first time. Kate tries to find closure when she confronts Sonny. Alexis and Kristina have a nasty encounter with Kiefer’s mother, Melinda. Johnny is still determined to get revenge on Sonny.

Morgan faces Dante, who promises he did what’s best for Michael and would never do anything to hurt him on Monday, May 3.

Michael delivers compelling testimony in the courtroom as his anguished loved ones look on Tuesday, May 4.

Dante and Lulu are glad they have each other and make love for the first time on Wednesday, May 5

Kate finds some long overdue closure with Sonny on Thursday, May 6.

Helena fuels Nikolas’ paranoia by suggesting Elizabeth will try and cut him out of her baby’s life on Friday, May 7.