The mob violence during Sonny & Kate’s wedding impacts many relationships.

Chaos breaks out during Sonny and Kate’s wedding after she is shot. Jason and Spinelli suspect Karpov as the culprit. Sonny wants Jason to take action against their enemies and won’t back down until he gets his way. Jason refuses to do Sonny’s bidding, causing the rift between them to grow. Carly doesn’t think Jason can hold out forever, and after talking with Max, Jason prepares to help Sonny, who vows revenge on his enemies. Jason threatens Karpov; Sonny tells Jason he wants back the organization. Will Jason give it up?

Lucky isn’t too thrilled when he learns Elizabeth is going to Italy with Jason. Elizabeth anxiously awaits Jason’s arrival at the airport, unaware of the chaos happening at Kate’s wedding. Lucky and Sam have their hands full with Jake and Cameron when they take them away for a few days. Elizabeth is crushed when her romantic getaway with Jason falls through. Jason tries to force Elizabeth to see what being with him could cost her.

Claudia confronts Karpov and thinks he’s innocent. Claudia tries to convince Anthony and Ric of his innocence, but they work to convince her otherwise. Ric learns how diabolical Anthony can be. With Lulu’s mental state fragile, Johnny takes her back to Shadybrook where he runs into Tracy.  Johnny blames himself for Lulu’s condition and spirals out of control, going as far as to pick a fight with Scotty! Olivia blames Sonny for putting Kate in danger and challenges him to own up to his role. Kate and Olivia share a secret. Nikolas and Jax continue to clash over business. 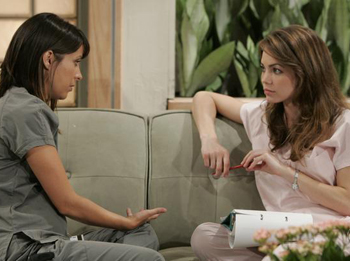 Though Jax still loves Carly, he refuses to let his heart be broken again on Wednesday, October 1. Also Elizabeth tries to talk some sense into Robin and Nikolas and Nadine make love for the first time.

Realizing life is too short to waste, Robin asks Patrick to marry her on Thursday, October 2. What will Patrick’s answer be? Find out on Friday, October 3, the same day Kate reveals a secret to Patrick.

Jason stands his ground with Sonny, while Anthony begins to lure Sonny into his trap. Things between Ric and Claudia heat up. Sonny feels Jason is betraying him. Tension is high between Jax and Nikolas. Jason doesn’t think he and Elizabeth can have a future together. Patrick and Robin reach a decision about their future. Claudia irks Olivia. Patrick is keeping a secret from Robin.

E-mail questions or suggestions about our format to: editor@tvsourcemagazine.com