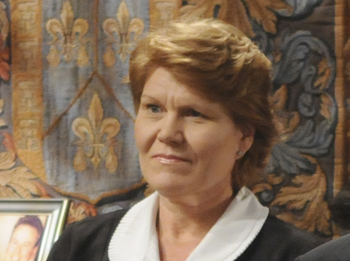 Known by GH fans as ‘Big Alice’, the Quartermaine’s maid, has tied the knot to long time partner, Elender. The couple has been together for more than 10 years and finally took the big step and got married on November 1st at their Southern California condo.

Engaged couples all know how stressful and chaotic planning a wedding can be. Bergen took on this huge endeavor and planned the wedding, catered it, and hosted the ceremony and reception in their Mediterranean courtyard. “We had about 90 people here,” Williams tells Soaps In Depth. “We have a beautiful Mediterranean courtyard in our condo, so we had it there. I even catered it,” the blushing bride adds.

Bergen Williams joined the ABC daytime soap, General Hospital, in 2002 as Big Alice Gunderson, the Quatermaine maid. Prior to her role as Big Alice, Bergen’s credits include Nip/Tuck, Scrubs, State of Grace and 7th Heaven, to name a few. She has also penned a few episodes of Power Rangers: Wild Force, and held the position of story editor for the same show. Her credits don’t only cover primetime, but also the big and small screen, including, Clifford (1994), Lord of Illusions (1995), Go For Broke (2002) and most recently Killer Pad in 2008.

We at TVSource Magazine wish Bergen and Elender all the happiness in their new life together.