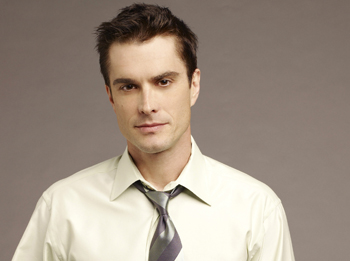 Claudia and Ric caught in the act …. almost.

When Jason tries to talk Sam out of getting involved, Sam insists she can be of help in taking down Anthony. Later, Jason visits Ric and receives a warning from Ric. Jason’s safety isn’t guaranteed just because Sonny is running Anthony’s organization. Claudia tells Sonny he’s going to lose it all if he doesn’t placate Anthony and make a move against Jason. Later, she seduces Ric in the hopes of finding out information about her father’s plans. Claudia and Ric end up in bed together and have to scramble to avoid getting caught by Sonny. Claudia’s seduction works like a charm when Ric reveals to her Anthony’s plans. Sonny becomes suspicious when Claudia gets paranoid all of a sudden. While Sonny pays Kate a visit, Claudia visits Anthony and tells him she knows what he’s up to.

The River of De-Nial Rages On

Robin and Patrick talk about her denying she may be suffering from Post Partum Depression. Robin, about ready to admit to Patrick she needs help, Matt pays them a visit. While visiting, Matt encounters Maxie and soon the fireworks begin. Robin and Patrick enjoy sitting back and watching Matt and Maxie argue. Robin jokingly admits to Patrick, Matt reminds her of him before they got together. Patrick meets with Jason to discuss Michael, then asks him about Robin and if Jason noticed anything different about her. Later, Patrick realizes there is a serious problem taking place at the hospital. After her visit with Robin, Carly visits Patrick and tells him she believes Robin is suffering from Post Partum Depression. Back at home, Robin struggles with routine motherly tasks. A frantic Patrick rushes to avert a tragedy at the hospital.

When Nikolas reverts to stall tactics to save Spoon Island from Jax’s plans, Olivia steps in and diverts him. Jason trying to save Carly from disappointment, makes an appointment to see Patrick about Michael’s condition. Matt turns on the charm towards Rebecca. Sam watches out for Spinelli, but when he finds out, his ego suffers. Olivia warns Sonny to stay away from Kate, but Sonny doesn’t take heed to the warning. Spinelli offers his services to Agent Rayner to find out what kind of deal Jason accepted from the Feds.

Lulu asks Carly to give Johnny a job at the hotel on Monday, January 19.

General Hospital will be pre-empted due to the Inauguration coverage on Tuesday, January 20.

Ric and Claudia heat things up on Wednesday, January 21.

Carly visits with Robin and gets more than she bargained for on Thursday, January 22.

Tragedy strikes the hospital and all are at risk. Lucky demands to know what is going on between Sam and Jason. It’s the end for Lucky and Sam. Sonny is on the verge of discovering Claudia’s secret. Nikolas catches a glimpse of Rebecca. Kate discovers what Claudia is trying to hide from Sonny. Robin goes deeper into a depression.