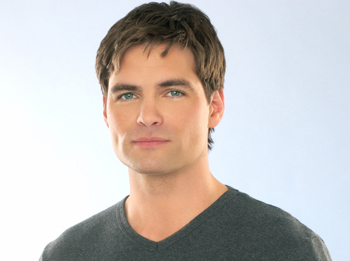 Bill wants to give Lizzie a few perfect days of childhood at Universal Studios in Orlando.

{xtypo_alert}Discuss all things soap by joining the our Message Board Community!
We’re also available on Twitter! Follow us to receive news and spoiler alerts.{/xtypo_alert}

Doris drops a bombshell on Frank

Lizzie is excited to be at Universal Orlando, and she and Bill rush into the park and put on matching shirts. They have fun in the kiddie section because Lizzie is afraid of the roller coasters.  Bill answers Lizzie’s phone and tells Alan that they’re at Universal Studios, Orlando. Lizzie enjoys the live stunt show and tells Bill that every girl wants Prince Charming to sweep into her life.  Meanwhile, Alan decides to take James (forcibly) and Beth down to Florida to rally the family together. Beth decides to go to Florida to make sure Alan doesn’t ruin Lizzie’s life, but then changes her mind as soon as Alan tells her that Phillip is in Ravenwood. Beth goes to Phillip at Ravenwood, who convinces her to take the trip to Orlando to keep Alan away from Bill and Lizzie.  Elsewhere, James invites Daisy and tells her to bring friends.  Christina and Ashlee make a packing list, but Daisy is reluctant at first. Bill makes a call to Phillip to ask for Lizzie’s hand in marriage!

Bill and Lizzie enjoy themselves in Florida until they see Lizzie’s family descending upon them.  Lizzie informs Alan that he was not invited, but Alan claims to just want to have fun.  Bill tells Lizzie to spend time with her family while he takes care of a pressing matter.  Daisy and James spend time together.  When Phillip arrives, he agrees to create a diversion for Alan to keep him away from the Sinbad show for Bill’s benefit.  Ashlee convinces Christina and Remy to go to the Sinbad show so they can see Bill propose to Lizzie.  Daisy, James and everyone watch as Bill takes the stage dressed as Sinbad!  The group leaves so Bill can propose to his true love.  Bill leads Lizzie to the garden, where they take advantage of their alone time and begin to make love.  Lizzie tells Bill that what he did was the most romantic thing that anyone has ever done for her.  Bill tells Lizzie he can’t imagine his life without her.  There, Bill asks Lizzie to marry him, and she says yes.  He gets down on one knee to give Lizzie a proper proposal and slips the ring on her finger.

Mallet and Marina decorate for Henry’s what they call an adoption party.  Beth is evicted from the Beacon.  Dinah tells Remy that Sister Angelica told her that Lara is Henry’s mother.  Rick makes sure Phillip’s room at Ravenwood has loose bars on the window so he can escape for hours at a time.  Natalia and Olivia admit they miss each other, but that they don’t know how to behave around each other.  Remy suggests to Dinah that she gets a DNA test to find out if Shayne is really Henry’s father. Natalia agrees to spend the weekend away with Olivia.  Remy doesn’t like the idea of Christina traveling with the Spauldings, so he surprises her. Frank is attacked by Doris’ bodyguards when he grabs Doris’ arm and accuses her of lying about Natalia.  At the park, Alan unknowingly stands in the splash zone and gets drenched.    Dinah steals some fibers from Shayne’s hairbrush.  Beth and Phillip reminisce about running off to New York together.  Frank plays dumb when Natalia visits him at the hospital.  Marina admits to Shayne that she blackmailed Clarice to drop the adoption investigation.  Daisy dares James to go on a roller coaster with her.  Olivia tells Natalia she takes the blame for what happened to Frank, who is watching their embrace through a window.