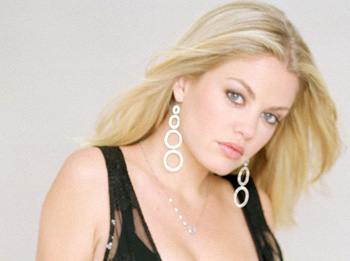 Jessica and Brody make love for the first time.

The Heat is On!

Gigi compels Brody to tell Jessica the whole truth, and when he does, Jessica lays a passionate kiss on the grateful guy, and they make love for the first time. They are so happy to be together, but Jessica reminds him they have to keep their relationship a secret. Later Viki catches them stealing kisses at Llanfair.

Marty gives Cole a call while she’s on the run with John, but promises she’ll return as soon as she can. Still believing that the murders are somehow “all about Marty” and Todd and Zach have been eliminated as suspects, only Powell Lord remains, so they make their way to Rochester. They pose as Kevin and Jessica to gain access to Powell at the Sidwell Institute for the criminally insane. Powell doesn’t seem to recognize Marty. John searches Powell’s medical file and discovers he’s had another visitor. John assures Marty he doesn’t believe she’s a murderer and they question who Powell’s visitor could be, and Viki provides a possible answer to their question. Then they discover something else . . . there’s only one bed in the motel room they’re sharing. Imagine that!

Bo and Nora are tormented when Mathew returns to school for the first time since the accident. They hide together in Bo’s car outside the school and share a close moment. Later things are awkward and they try to bury their feelings.

Langston and Markko plan to make love for the first time.

Todd finds Tea on a date with RJ and when she gives him the cold shoulder, he tries to make her jealous by flirting outrageously with another woman. Tea’s date with RJ ends, and when she returns to her room, Todd shows up and they have encore sex, before doing battle in court the next day. Dorian is crushed when Todd shows up at La Boulais and announces he’s been awarded temporary custody.

Monkey on his Back

After being confronted with the drugs Starr found, Cole admits he can’t kick the habit. Starr promises to help him and sneaks him into La Boulaie. Todd’s new custody arrangements force Starr to leave Cole just when he needs her the most, and Cole suffers through withdrawal alone.

Schuyler exposes Stacy when he shows the bag of her blood to Rex and accuses her of being up to something. But the brilliant PI accuses Schuyler of lying and insists that Stacy is a hero. Schuyler kicks Stacy to the curb. Gigi is tempted once again to tell Rex the truth, but she’s reminded of her vow to God and resists. Rex and Gigi explain their break-up to Shane. When Rex walks away, a devasted Gigi dissolves into sobs. Roxy pulls the plug on “John Doe” and later is informed that he died, but in fact, he remains very much alive.

Rachel and Nora continue to disagree about how Cole should be treated, but Matthew is cool with Rachel’s decision. Matthew is cruel to Destiny when she why Becca claimed to be his friend, but Matthew soon discovers the truth. Ray isn’t the least put off by Dorian’s admission that she’s not a goody two shoes.

Schuyler tells Rex that Stacy is up to no good, and Brody tells Jessica the truth on Monday, April 27.

Jessica and Brody make love, Dorian and Ray run into Viki and Charlie at the Palace on Tuesday, April 28.

Marty comes face to face with Powell, Todd forces Starr to come live with him, and Bo and Nora share a close moment on Thursday, April 30.

John and Marty’s motel room has only one bed, Powell gets another visitor, and Cole endures withdrawal on Friday, May 1.

John and Marty are affected by their closeness. Blair leaves her hospital bed to face off with Todd. Rex and Gigi long to be together, but Rex’s rejection is devastating. Starr and Cole get surprising news about Hope, and Kyle blackmails Natalie and Jared. Marty’s life is in danger, but Todd, Tea and Blair fall victim to the killer’s latest plot.