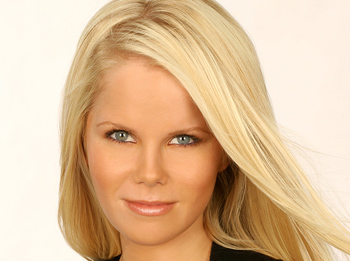 Stacy has a momentary attack of conscience but reverts to her true form.

Rex moves out of the carriage house, leaving a heartbroken Gigi behind.  Stacy moves in with Rex.  When Rex goes to see Gigi to make arrangements to see Shane, he confesses he had a dream.  Gigi shares that she had the exact same dream and they kiss.  Stacy has a momentary lapse into humanity, as she realizes how deeply hurt Rex is by the break up, but no worries, it doesn’t last long and she tells Shane that Gigi is responsible for the breakup because she cheated on Rex.   Stacy’s vindictive little revelation backfires when an angry Shane shows up on Rex’s doorstep, insisting he’s there to live with Dad.

Blair hauls herself out of her hospital bed to retrieve her kids from Todd.  When Todd doesn’t back down, Blair makes herself at home.  However, Starr’s already made her move to get back to Cole where she sticks by him as he suffers through withdrawal.  Back at Todd’s, everyone gets a surprise when Tea shows up for some loving and flashes Blair and Jack.  Later, Todd, Tea, and Blair receive invitations to the KAD spring fling that Powell and Rebecca have laced with a chemical that knocks them out.

Kyle blackmails Roxy to give him free room and board.

Cris and Layla both contemplate giving up their residences because neither can afford their rent. Cristian and Layla soothe the pain of their loss with a little painting.

And finally, John tells Marty about the night they made love, and then they share the only bed in the room. The earth doesn’t actually move, but the pair is nonetheless shaken by their intimacy.

Schuyler sneaks into the hospital lab to run tests on Stacy’s blood. This week Kyle Lewis proves to be a little more devious than we previously knew.  First he blackmails Roxy.  Then after he informs Starr and Cole that they are not “Hope’s” parents, he puts it all together and realizes Natalie’s sister is raising Starr’s baby and immediately sets out to make this little nugget of info pay off.

Jessica and Brody explain to Viki why they have to keep their relationship a secret.  Viki urges Gigi to fight for Rex, while Natalie chews Rex out prompting him to confront Brody. Rex interrupts Brody’s and Jessica’s clandestine tryst, and mistakenly believes Brody is with Gigi and then he punches Brody.  Somebody finally gets the goods on Stacy when her former boss man Stan shows up to collect a debt.  John comes face to face with a diabolical Rebecca as Powell shows up at Marty’s door.  Cole and Starr decide to exhume Hope’s body and ask Marcie for her blessing, and Bo for his help.  Matthew apologizes to Destiny.

Cole hallucinates that Matthew is urging him to jump from Starr’s window during withdrawal, and Blair confronts Todd on Monday, May 4.

Rex confronts Brody then kisses Stacy.  Cole and Starr learn the results of the DNA test, and Jessica and Brody make love on Wednesday, May 6.

Kyle confronts Natalie and Jared, Tea flashes Blair and Jack, Shane moves in with Rex on Thursday, May 7.

John and Rebecca, and Marty and Powell come face to face.  Cole faces Bo for the first time since Matthew became paralyzed on Friday, May 8.

Langston stands up to Dorian. Bo and Clint go head to head over Nora. Jared and Natalie realize the truth will come out. Jessica has memories of “Chloe’s” birth. Powell torments Todd, Tea, Blair and Marty, while John desperately tries to get to Marty.