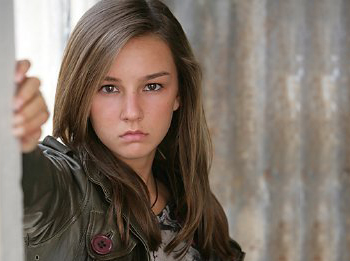 Alexis has her hands full with her teen daughter, Kristina.

Michael confides in Kristina about his outbursts and hopes he doesn’t hurt someone he loves. Jason concerned for Michael asks Sam to have a talk with Kristina. Michael skips out on his therapy session and heads to Jake’s. Once at the bar, he finds himself in a confrontation with Kristina’s friend, Keifer. The two come to blows and Keifer knocks Michael down to the ground. Alexis arrives at Jake’s and takes both Kristina and Michael home.

Mayor Floyd asks Alexis to talk with Diane in the hopes of sweeping the situation with Brianna Hughes, under the rug. Alexis goes to Diane and tells her the situation Mayor Floyd has put her in. Sam has been hired by Mayor Floyd’s wife, Andrea, to get proof her husband is having an extramarital affair, which leads Sam to learn about Brianna Hughes’ death. When Spinelli hears this, he immediately jumps to the conclusion Brianna Hughes was murdered. Diane wonders why Alexis is cowering to the Mayor’s demands. Maxie and Spinelli break into the Mayor’s office to find evidence and are forced to hide when Mac and the Mayor return unexpectedly. Mac sees Spinelli and Maxie hiding but doesn’t let on to the Mayor. Later, Mac asks Robin to have a talk with Maxie about playing private eye. Robin is surprised to hear Sam was hired by Mayor Floyd’s wife to find proof about her husband.

Patrick is soon regretting allowing Matt to perform the operation on Brianna Hughes. Matt goes to Jake’s and hits on Maxie and gets into a physical altercation with Spinelli. Johnny gets his punches in on Matt and begins to pummel him to the ground. Coleman calls Patrick to come and get Matt who is in pretty bad shape. Robin and Patrick arrive and take Matt home. Later, Patrick inadvertently gives Diane information about Matt he shouldn’t. Diane informs Patrick, he too, is also named in the malpractice suit. Patrick gets a surprise visit from the Mayor’s wife, Andrea, who asks him to quietly settle the malpractice suit out of court.

Jason inadvertently punches out an undercover cop when he defends Sam. Ric tells Sonny there is a high possibility he is the father of Claudia’s baby. Nikolas struggles with the decision to keep seeing Rebecca, or not. Tracy finds Rebecca and Ethan together. Olivia asks Cary for help. Jason and Johnny find themselves in trouble when they go to meet some associates in a secluded location.

Carly and Jax reach a decision about Michael. Jason and Johnny fight for their lives. Morgan’s life is in danger. Carly and Michael search for Morgan. Patrick and Robin set out to solve a murder mystery. Ric is up to no good. Michael wants to follow in his father’s footsteps. Claudia scrambles to cover her tracks. Kristina comes face to face with a killer. Sonny clashes with Michael. Carly decides Michael isn’t safe with Sonny. Ric believes everything’s working out just the way he wants. Jason faces a tough decision. Spinelli puts the brakes on romance with Maxie. Sonny goes overboard to gain Michael’s forgiveness.