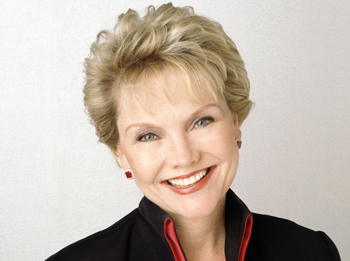 Are wedding bells in Vicki’s future?

Michael and Marcie share vows to love each other forever. Although Starr is torn, she signs the papers legalizing Hope’s adoption and places her in Marcie’s waiting arms. Starr grieves with Cole. Marcie knows that Starr and Cole are hurting and later she overhears Langston telling Markko that Starr almost didn’t go through with the adoption. Marcie tells Michael they need to talk, and afterward shows up at Starr’s door with Hope.

Jessica’s guilt over the death of her baby is overwhelming, but Brody tries to convince her that she’s strong enough to take it, and he tells her that nothing could make him stop loving her. Jessica understands why Natalie kept the truth from her, but how do Michael and Marcie respond to Natalie’s apology?

Although Todd and Blair momentarily put their differences aside and mourn their loss together, the détente is shattered when Todd insists on taking the kids home with him and reminds Blair that he still has legal custody. Then Todd promptly proceeds to the hospital where he invites Tea to recuperate at his place. Marty makes it clear to John that she wants to resume their romance, and Blair seeks John out to discuss their marriage. John tells Blair he will remain married to her, in name only, until she gets custody of her children but he wants to pursue his relationship with Marty. Blair wishes that she and John could have made a real go of their relationship, and adding insult to injury, she’s crushed further when she sees Todd, Tea and her children looking like the picture perfect family.

FOR WHOM THE WEDDING BELLS TOLL

Charlie surprises Viki with a proposal and Clint wants Nora to become his wife sooner rather than later. Renee suggests a double wedding. Dorian is hurt when Ray announces he’s leaving Llanview, and she becomes enraged when she sees happy couples at every turn.

Shane overhears Gigi say she never slept with Brody, but Stacy convinces him that is a lie. Stacy and Rex have some playful time. Marty barely makes it in time to see Cole graduate, but Cole is disappointed to learn he won’t receive his real diploma until he passes summer school. After seeing Michael with Hope, he runs into Asher on the docks. Convincing John to return to the LVPD isn’t going to be as simple as Bo would like.

Brody declares his love for Jessica and Charlie proposes to Viki on Monday, June 8.

The peace between Todd and Blair is broken and Marty makes her feelings for John clear. Rex and Stacy have some playtime on Tuesday, June 9.

John promises Blair he’ll help her get her children back but tells Marty he wants to pursue a relationship with her on Wednesday, June 10.

Natalie apologizes to Michael and Marcie. Marcie overhears Langston tell Markko that Starr almost didn’t go through with the adoption on Thursday, June 11.

Marty testifies at the Manning’s custody hearing, Cole graduates and Marcie shows up at Starr’s doorstep with Hope on Friday, June 12.

Gigi believes she’s closer to getting Rex back, but Rex feels a growing attraction to Stacy. Starr has hopes for the future, but Cole faces some serious trouble. The judge lays down the law to Todd and Blair, and Tea lashes out at Todd for jeopardizing her career. Marcie’s greatest wish comes true.