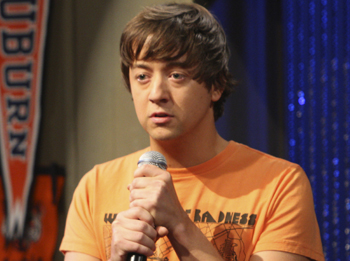 Spinelli lays it all on the line during karaoke night at Jake’s! 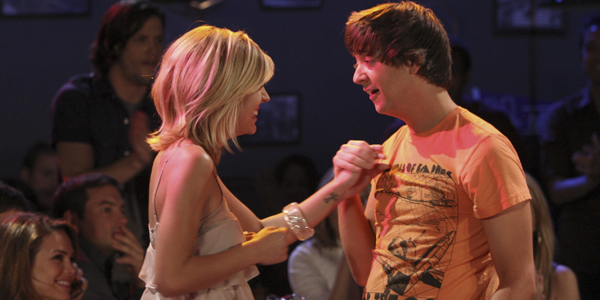 Spinelli overhears Maxie trying to convince Patrick to get Colemen to cancel karaoke night at Jake’s, because she doesn’t want Spinelli to embarrass himself. Patrick tells Spinelli about a software that could help him with his singing. Spinelli takes Patrick’s advice and discovers the device has helped him with his voice. He doesn’t reveal to Maxie his using the device but claims his voice is much better because he is singing to her. At Jake’s, Spinelli panics when the voice device falls into a pitcher of beer.

Lulu forces Ethan and Lucky together when they all meet up at Jake’s for karaoke night. Maxie encourages Spinelli to take the stage and sing her a song. Rebecca shows up at Jake’s with Nikolas, and they meet up with Lucky, Elizabeth, Lulu and Ethan. Spinelli reluctantly takes the stage and is overcome with stage fright.

Sonny agrees to give Dominic a second chance to prove himself. Claudia doesn’t believe Dominic deserves a second chance and she makes it very clear to Sonny, she doesn’t want him hanging around. Sonny storms out and goes to Olivia’s. He and Olivia get into an argument which has a surprise ending, while Jason is left speechless when he sees Sam wearing a sexy outfit when she’s on an undercover assignment.

After overhearing Robin’s theory about who killed Brianna, Andrea hatches plans of her own. She sneaks into Alexis’ house, unaware Kristina is still in the house. Andrea plants emails on Alexis’ computer to make it look like Alexis is obsessed with Mayor Floyd. Kristina becomes very upset when she finds the emails Andrea planted, leaving her to believe her mother is lying to her. Andrea calls Alexis to set up a meeting at Metro Court, then makes a scene when they meet to make Alexis look bad in front of Robin and Patrick.

When Jason is brought in for questioning regarding the murders of two gunmen, Diane asks him to stay locked up to make it look good for Alexis. Diane informs Alexis that emails she supposedly sent to Mayor Floyd have been made public for all to see. In turn, Alexis is put on suspension as District Attorney baring an investigation.

Ethan is not happy when he learns Rebecca is moving into Wyndemere with Nikolas. Rebecca is threatened to be exposed if she does not encourage Nikolas to give her money. Nikolas offers money to supplement Rebecca’s income and she refuses it. Ethan becomes jealous of Rebecca and Nikolas. Dominic asks Kristina to get him information about Sonny’s organization. Michael is surprised when Carly doesn’t get upset about him taking Morgan out for a drive in the new car. Sonny forbids Michael from driving the car, but Carly hands Michael a learner’s permit. .

Dominic suggests that he and Claudia could help each other. Ethan puts the pressure on Rebecca. Claudia confronts Sonny about being with Olivia. Dominic tries to get Jason to trust him. Maxie’s blindsided by Spinelli. Ethan takes his con game in a new direction. Sonny and Johnny clash over Olivia. Ethan goes behind Rebecca’s back to confront Nikolas. Maxie has to make a decision. The warmth between Sonny and Claudia quickly deteriorates. Spinelli plans a romantic rendezvous. Kristina’s boyfriend is nothing but trouble. Claudia gets the news she’d been praying for. Sonny makes another play for Olivia. A potential tragedy is in the making.