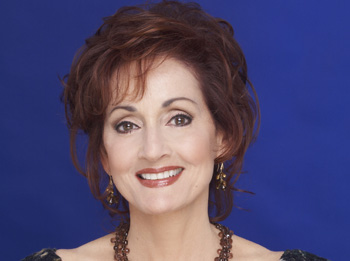 Dorian finds a surprise on her doorstep …. David!

Tea suffers assaults professionally, and personally. Professionally, Matthew’s case hits a snag right off the bat when the judge rules that there is insufficient cause to proceed with testimony. On a more personal level, Bo and Nora’s attorney, Elijah, insinuates he has the goods on Tea’s “secret” which will have a profound impact on her relationship with Todd. To make matters even worse, Todd decides he’s going to hire Elijah to try to overturn the judges ruling in his custody case. When Todd tries to convince Viki that his feelings for Tea are the real deal, Viki has her own take on the situation, which leaves Todd with a lot to consider. Last, but never least, Blair admits to Dorian that she really doesn’t want Todd, but she doesn’t want Tea to have him. Blair hires Rex to investigate Tea and her deep dark secret, but all Rex learns is that Tea was missing in action since she was rescued from the island, until she returned to Llanview. More determined and curious than ever, Blair is on a mission to find Ross, Tea’s companion on the island, to dig up dirt on what Tea’s been up to.

Dorian and Viki are busy this week as well. As Dorian is recovering from her hangover, David shows up on her doorstep with a camera crew! David’s plans to use La Boulaie as the setting for his new reality series come to an abrupt halt when he and the crew are forced to make a hasty retreat from Dorian and her garden hose. Not to be dissuaded, David proceeds to Llanfair, where he’s met with equal resistance from Viki to his latest business proposition. Viki and Dorian make surprising allies when they unite, as members of the hospital board of directors, to reinstate Marty’s hospital privileges over Mayor Lowell’s opposition.

Rachel and Greg get heated. Matthew is hurt when Rachel refuses to testify on his behalf, and Rachel is furious when Greg agrees that he will. Cristian leaves Fish and Layla alone, with the understanding that Fish is going to tell Layla the truth, but after receiving a phone call from his parents, Fish renews his commitment to being the man he’s “supposed” to be. Cristian is stunned to learn that Layla and Fish slept together. John promises he will give Marty all the time she needs. Asher’s boss, Serge, is impressed by Cole and considers moving him higher up in the organization. Jessica accuses David’s producer of being her stalker. Jessica tells Marty about seeing Nash. Jared and Natalie anonymously receive a DVD containing footage of Nash’s fall to his death. Stacy’s friend Kim arrives from Vegas, and upon learning of Stacy’s situation, suggests all Stacy has to do is get pregnant again.

Tea and Elijah faceoff, David returns, and Rex finds out about Gigi and Schuyler’s kiss on Monday, August 10.

Jessica confides in Marty, Jared and Natalie receive a DVD, the hospital board meets to discuss reinstating Marty and David seeks out Viki on Wednesday, August 12.

Brody finds proof that Jessica’s stalker is real, Fish gets a call from his parents, Greg’s date sees sparks between him and Rachel, and John eases Marty’s fears on Thursday, August 13.

Elijah threatens Tea, Stacy’s friend arrives and Cris is incredulous to learn that Layla and Fish consummated their relationship on Friday August 14.

Stacy tries to come up with a potential baby daddy. Rex is furious at finding Gigi and Schuyler in an embrace. The sparks fly between Rachel and Greg. Bo and Nora continue to talk around their feelings for each other. Matthew delivers emotional testimony at his court hearing. Todd accuses Blair of going after Tea out of jealousy. Kim helps Stacy consider possible candidates for her baby daddy. Elijah rattles Tea. Jessica turns to an unlikely source for answers. A scheming David embraces his Buchanan roots. Jared and Natalie wonder who has a grudge against them. Delphina has a warning for Jessica. Cristian is more confused about Fish than ever. A twist of fate throws Marty and Todd together. Elijah threatens Tea. Stacy and Kim set their sights on Schuyler.