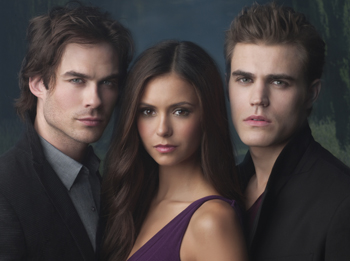 May Sweeps previews for The CW series: 90210, The Vampire Diaries, Smallville and more!

It’s sweeps time! As the season winds down, your favorite shows are raising the ante with their guest stars and taking up on a path leading you into their explosive season finales!

Our buddies at the CW are giving fans a tease of what’s to come on your some of your favorite CW series’. Earlier today, the CW sent out a press release touting some of what to expect this May. While these are teasers…some would consider them spoilers, so if you’re one of those people who are spoiler free then we advise you turn away now…

Below are May Sweeps highlights for your favorite CW series such as: 90210, The Vampire Diaries, Smallville, Supernatural and One Tree Hill.

THE VAMPIRE DIARIES — “Blood Brothers” (8:00-9:00 p.m.) – While Stefan (Paul Wesley) struggles to come to terms with his past, both he and Damon (Ian Somerhalder) reveal parts of their history to Elena (Nina Dobrev), until she finally learns the truth about how they became vampires.  Pearl (guest star Kelly Hu) has an ugly confrontation with Johnathan Gilbert (guest star David Anders).  Damon and Alaric (Matt Davis) try to find a mysterious invention before Johnathan does.

SUPERNATURAL — “The Devil You Know” (9:00-10:00 p.m.) – Sam (Jared Padalecki) and Dean (Jensen Ackles) face off against the Horsemen and try to trap Lucifer himself.

ONE TREE HILL — “Learning to Fail” (8:00-9:00 p.m.) – Nathan (James Lafferty) and Haley (Bethany Joy Galeotti) struggle with the aftermath of her mother’s death.

90210 — “Meet The Parent” (8:00-9:00 p.m.) – Teddy (Trevor Donovan) invites a nervous Silver (Jessica Stroup) to meet his father, Spence (guest star Ryan O’Neal), for the second time and the meeting doesn’t go quite as planned.  Adrianna records a duet with Javier Luna (guest star/Latin recording artist Diego Boneta), a famous young pop singer, who quickly wins her over with his charm.

THE VAMPIRE DIARIES — “Isobel” (8:00-9:00 p.m.) – Isobel (guest star Mia Kirshner) returns to town and stuns Alaric (Matt Davis) with her attitude and her demands that he arrange a meeting with Elena (Nina Dobrev).  When mother and daughter finally meet, Isobel refuses to answer most of Elena’s questions, but reveals that she will stop at nothing to find the mysterious invention Johnathan Gilbert (guest star David Anders) has been searching for.

THE VAMPIRE DIARIES — “Founder’s Day” (8:00-9:00 p.m.) (SEASON FINALE) – Founder’s Day has finally arrived, and everyone is busy with last-minute preparations for floats and fireworks. Although Damon (Ian Somerhalder) and Alaric (Matt Davis) do their best to stop him, Johnathan Gilbert (guest star David Anders) sets a plan in motion that brings Founder’s Day to an end amid chaos, destruction and death.

SUPERNATURAL — “Swan Song” (9:00-10:00 p.m.) (SEASON FINALE) – The showdown between good and evil is at hand.  With the Apocalypse looming, Sam (Jared Padalecki) and Dean (Jensen Ackles) realize they are out of options and make heart-breaking decisions that will change their lives forever.  A beloved character faces death.

SMALLVILLE — “Salvation” (8:00-9:00 p.m.) (SEASON FINALE) – When Zod (Callum Blue) and the Kandorians launch their brutal attack on Earth, Chloe (Alison Mack) calls in some old friends to join the fight against the aliens.  Clark (Tom Welling) and Zod face off in an epic battle for the control of Earth.

ONE TREE HILL — “Almost Everything I Wish I’d Said the Last Time I Saw You…” (8:00-9:00 p.m.) (SEASON FINALE) – Haley (Bethany Joy Galeotti) tries to overcome her depression by joining Nathan (James Lafferty), Jamie (Jackson Brundage) and the rest of the Tree Hill gang on a trip to Utah for the premiere of Julian’s (Austin Nichols) film.

90210 — “Confessions” (8:00-9:00 p.m.) (SEASON FINALE) – Teddy (Trevor Donovan) discovers that Spence (guest star Ryan O’Neal) tried to bribe Silver (Jessica Stroup) and takes it upon himself to seek revenge in a most confrontational way.  Annie (Shenae Grimes) and Liam (Matt Lanter) test out the waters with his new boat, where they share their darkest secrets.  Little do they know that someone is nearby and decides to share an explosive flame of gasoline with Liam’s boat.

CBS has announced the premiere dates for their upcoming Fall 2022 season. As previously announced,…