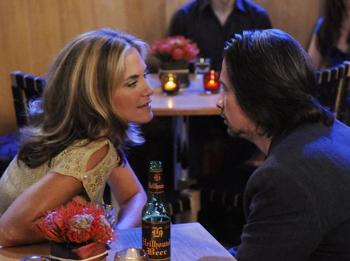 This fall on One Life to Live, Blair tries to put Todd behind her and focus on her blossoming relationship with John, but can she resist falling back into old habits?

Todd/Marty/John/Blair: Todd and Marty are building a relationship and Marty is growing more dependent on Todd. John still believes that Todd is hiding someone in his house and he can’t let go of that. Meanwhile, Blair is trying to put Todd behind her but she can’t help but wonder who the woman Todd has in his house.

Starr/Marcie/Todd: Starr’s pregnancy is progressing. Starr is getting into the third trimester. Todd decides that he will not let Starr give his grandchild up, least of all to Marcie McBain. Todd starts to formulate his own plan for his grandchild regardless of what Starr wants.

Rex/Gigi/Brody/Shane: The 1968 storyline continues through the rest of the month. With Gigi gone, Shane and Brody are getting closer. When Rex and Gigi return, will Brody give his family without a fight? When Brody first came to town he drank a lot and had a lot of nightmares. Something has been troubling Brody and that will be explored.

Clint/Dorian/Langston/Ray: Clint is determined to get BE back from Dorian. He believes that Dorian’s one weak spot is her family so he has Langston investigated. Clint determines that Langston has an uncle she wasn’t aware of. Her uncle Ray will come onto the canvas.