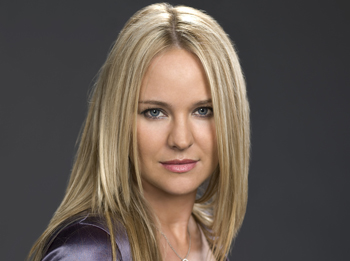 A secret letter from Sharon to Nick is discovered. Michael is floored to see River in Genoa City.

Nick and Phyllis don’t see eye to eye about Restless Style. A secret letter from Sharon to Nick is discovered. Michael is floored to see River in Genoa City. Jeffrey catches River and Gloria in a compromising position. Cane & Lily tell each other goodbye. Jack threatens Victor. Phyllis comes up with a plan she hopes Nick will accept. Daily TVGuide Spoilers
Monday – Cane and Lily bid adieu. Nick tells Sharon he’s sorry. Tuesday – Nick attempts to see Victor. Gloria and River wake up together. Wednesday – Phyllis expresses her feelings about Sharon to Nick. Kay turns to Victor. Thursday – Nick and Phyllis argue about the magazine. Daniel is rejected by Amber. Friday – Nikki accepts Phyllis’ offer. River is caught. jsnyder@tvsourcemagazine.com | onobles@tvsourcemagazine.com Contribute content to TVSource Magazine Content: Fans wishing to send-in news items, previews, show recaps, interview recaps, or anything else newsworthy can now do, with any desired credit, via e-mail by CLICKING HERE.

Blackmail and hostages, and secrets. Oh my! Everyone is getting busted. All that, and more,…

All the baby mamas are bringing the drama. Find out what’s happening in Port Charles…

With the past Friday ending on an annoying cliffhanger, in the form of Zoe and…

Hook ups, a walk of shame, marriages on the rocks, and a trap is sprung….