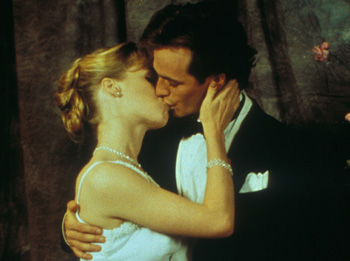 The day after Thanksgiving, SOAPnet will air a 12 hour marathon centered on Beverly Hills 90210‘s Kelly Taylor (Jennie Garth). Or to be more exact, the men that love her. Brandon, Dylan, Steve, & Matt all fell for her over the course of the shows ten year run on the 90’s on FOX.

This marathon has it all, from the beginning where Kelly forgot Steve’s birthday because she wanted Brandon to when she fell for her best friends boyfriend Dylan to when she left her fiancé Matt conflicted over feelings for her ex. But, in the end no one could tame this California girl.

However, Kelly’s story wasn’t over there. She can currently be seen on The CW’s new 90210, all grown up as a guidance counselor at West Beverly High. Kelly’s juggling her job, an almost grown up sister Silver, her dating life, and being a single mother to her son Sammy – via absentee father Dylan.

Below is a list of episodes in the “Kelly’s Leftovers” marathon:

11AM – “Spring Dance” – Kelly adds insult to injury when she not only forgets Steve’s
birthday, she asks Brandon to the Spring Dance instead of him. David wins the dance contest,
and therefore the right to a dance with Spring Queen Kelly. (originally aired: 1991)

12PM – “Shooting Star/An American In Paris” – With Brenda off in Paris, Kelly gets
romantic with Dylan. (Originally aired: 1993)

1PM – “Back In The High Life Again” – Dylan tells Kelly that he chooses her over
Brenda, and they kiss in the pool. (Originally aired: 1993)

2PM – “Change Partners” – When Kelly pretends to be Brandon’s girlfriend on a task
force retreat, their feelings start to become real and they end up in a kiss. (Originally aired: 1994)

3PM – “A Pig Is A Boy Is A Dog” – Steve accidentally gets caught in the middle when
Brandon and Dylan fight over Kelly. (Originally aired: 1994)

4PM – “What I Did On My Summer Vacation” – Kelly and Brandon start to tell their
friends that they’re now a couple. Meanwhile, Steve returns from Hawaii convinced that Kelly
is the love of his life, and they must reunite. (Originally aired: 1995)

5PM – “Hello Life, Goodbye Beverly Hills” – Kelly’s torn when Dylan asks her to join
him on a trip around the world, and Brandon proposes to her. (Originally aired: 1995)

8PM – “Love Is Blind” – Dylan gives Kelly an unexpected wedding gift and then asks
her to come back to him. (Originally aired: 2000)

9PM – “The Penultimate” – Kelly is torn over her feelings for Dylan and calls off her
engagement to Matt. (Originally aired: 2000)

10PM – “Ode To Joy” (series finale) – Matt comes to David and Donna’s wedding to
try and reconcile with Kelly, but realizes that she should be with Dylan. (Originally aired: 2000)