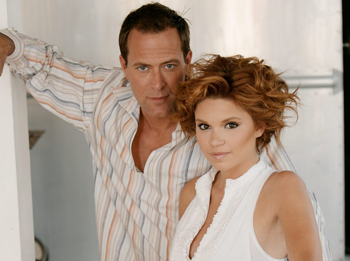 A Search For The Truth

Lizzie confides in Cyrus about Bill. She thought that once he woke up, he could set the record straight about his role in her kidnapping. A heartbroken Bill watches her. Lizzie reads a note from Bill saying that he is leaving town. Alan informs Doris that Bill is violating his bail agreement and leaving town. Bill goes to the factory. Daisy calls Lizzie and tells her that the police are looking for Bill. Lizzie texts Bill. Billy finds Bill and wants Bill to go to the police with him. Lizzie thanks Dinah for sticking up for Bill. Bill calls Dinah and asks to see her. He asks her if he is capable of kidnapping Lizzie. He admits to Dinah that he can’t remember the time around the kidnapping. Alex tells Lizzie that Spaulding is about to go under, but Lizzie only cares about Bill.

Lizzie is angry at Cyrus for not being able to prove that Bill is innocent. Exhausted and stressed, Lizzie collapses into Cyrus’ arms. Rick admits Lizzie into the hospital as she is on the brink of a breakdown. Filled with guilt, Dinah reassures Bill he couldn’t have kidnapped Lizzie, she is positive of it. Dinah is about to tell Bill the truth but she spots Grady and clams up. Dinah urges Bill to go to the police. Grady issues Dinah a warning. Bill goes to Frank and tells him he is being set up. Cyrus tells Bill that Lizzie has been hospitalized. Cyrus tells a guilt ridden Dinah that Alan will kill Bill if the truth came out.

Daisy expects Coop to be on her side regarding Grady. Daisy tells Coop that he would hate it if people started judging him by who he was seeing. Coop knows she is telling the truth. Ashlee wants to help Grady get a job, so she goes to Doris who hires him. Daisy is surprised with Grady’s news while Dinah is stunned. Dinah fears Grady is being set up but he doesn’t believe so. Ashlee tells Daisy that Grady truly loves her and Ashlee is jealous that Daisy has found true love. Dinah suggests to Doris that Bill is being set up but Doris is convinced of his guilt. Grady tries to decipher a code that he found at Doris’ desk and is shocked when Doris catches him and compliments him. Doris tells Ashlee that she once dated a guy like Grady. Grady asks Daisy to move in with him now that Marina and Mallet are married.

Daisy tells the newlyweds that she wants to move out so that they can have their space. Mallet wants Daisy to wait until after the holidays before she makes a decision. Daisy agrees, and then overhears Mallet and Marina saying that they don’t think she will move in with Grady. Daisy decides to move out immediately and leaves with Grady.

Mallet and Marina decide to throw a holiday party instead of a wedding reception. After the holidays, they will go on a honeymoon. Natalia feels guilty that Olivia lost her job. Frank tries to convince Natalia to buy the farmhouse, much to Rafe’s delight. Olivia calls Natalia and asks for her help. Natalia agrees to buy the farmhouse if Olivia will rent a room from her.