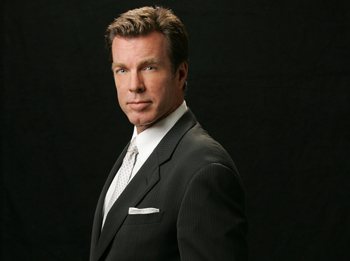 Jack has an attack of conscience.

Sharon tells Ashley she threw Jack out of the mansion. Sharon confesses to Ashley that Jack was sleeping with hookers. Ashley confronts Jack and wants to know exactly what is going on. Nick runs into Sharon, who tells him about Jack. Phyllis refuses to admit that she had any part in revealing the incriminating credit card history to Sharon. Brad offers Sharon more than a shoulder to cry on. Phyllis calls Brad and suggests that he take Sharon out of town. Brad agrees. Phyllis then suggests to Nick that Sharon should go to New York on a business trip. Nick believes that Jack has something to do with Victor’s diary. Jack has an attack of the conscience when Sharon turns out to be more understanding than he thought.

Billy and Cane argue at Jabot. Billy tries to talk to Lily about Jabot, but she refuses to listen. Lily turns to Cane. Lily tells Cane she misses him and then gives him a kiss on the cheek when Cane leaves. An angry Chloe witnesses the exchange and confronts Lily. Later, Lily goes to Cane and Chloe’s and rips into her. Cane walks in as Chloe falls off the ladder she was standing on. Billy thinks back to the time when he and Chloe were together. He begins to figure out that he may be the baby’s father. He turns to Jack, will he tell Jack about his suspicions or not?

Also: Katherine makes a confession. Jeff tries to get back at Gloria, will he succeed? Jana makes a surprising decision. Victor and Nick bond. Lauren and Michael hear devastating news