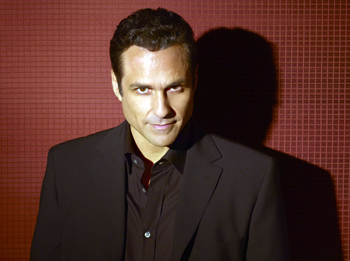 Sonny has his doubts when Michael exposes Dominic as an undercover cop!

Sonny fears Maxie will tell Mac all she knows about the night Claudia disappeared but Maxie manages to hold it together and doesn’t tell Mac anything. Dominic tells Olivia soon Sonny will be arrested and admits he felt honored when Sonny asked him to take over the business one day. Dominic feels the guilt as the day approaches that Sonny will be arrested. Michael tells Sonny that Dominic is an undercover cop but Sonny doesn’t believe him. Just to be on the safe side, Sonny tells Jason to investigate Dominic. Olivia believes she’s convinced Agent Rayner to take Dominic off Sonny’s case and to postpone Sonny’s arrest, but to her surprise, Agent Rayner orders the take down of Sonny to be sooner rather than later. Jason and Spinelli take a closer look at Dominic. Jason begins to grow suspicious of Dominic after speaking to Sonny’s housekeeper. Dominic re-evaluates his relationship with Lulu. Olivia admits to Johnny that she went to Dominic’s superiors to take him off the case.

Jason and Sonny get proof that Dominic is an undercover cop and Jason is ordered to take out Dominic before Josslyn’s christening. Ronnie tells Dominic the arrest warrant has been approved, but Dominic wants to wait until after Josslyn’s christening. Lulu refuses to let Dominic push her away. Johnny accuses Olivia of wanting to protect Sonny and walks out on her. Dominic makes a bold move when he realizes Sonny is planning on having him meet an untimely demise and their confrontation takes a tragic turn.

Mike is taken to the hospital after he’s found badly beaten and Patrick encourages Lisa to perform the surgery. Carly learns of Elizabeth’s affair with Nikolas and urges Jason to stake his claim to Jake. Mike’s surgery is a success and Patrick sings Lisa’s praises to the chief of staff. Michael turns to Jax for help. Sam is very supportive of Jason’s decision regarding Jake. Jason thinks Jake is still better off being parented by Elizabeth and Lucky than him even if they are no longer together. Jax believes the fallout from Sonny’s arrest will break up his family. Carly plans for Josslyn’s upcoming christening. Luke shares his worries about Lucky with Tracy. Josslyn’s big day arrives and everyone gathers at the church for the christening.

Michael tells Sonny that Dominic is really an undercover cop on Monday, January 25. Sam tells Jason she’ll support whatever decision he makes about Jake on Tuesday, January 26. Jason and Spinelli take a closer look at Dominic on Wednesday, January 27. Luke shares his worries about Lucky with Tracy on Thursday, January 28. Robin advises Nikolas to keep his distance from Elizabeth on Friday, January 29.
© 2010 TVSource Magazine. All rights reserved
Please credit TVSource Magazine and provide a link back if you copy & paste our spoilers