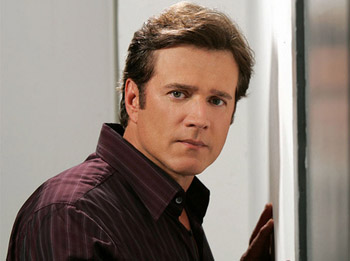 The town of Springfield celebrates Thanksgiving.

A Day of Love and Thanks

Mallet stops Marina from telling Frank about their plan to get married at Mount Arrowhead. Buzz decides to open up Company for anyone who doesn’t have anywhere to go for Thanksgiving. Beth orders a delivery, expecting Coop to deliver it. She is shocked when she opens the door in her lingerie and sees Buzz standing there. Coop discovers that Buzz took the delivery and runs to Beth’s room. Coop overhears Beth explaining to Buzz the reason why she is having an affair is that she is lonely and found a person who really understood her. Buzz reminds her that Alan would seek revenge if she and her lover were ever found out. Frank hints to Mallet that he wants to know what Mallet’s intentions are towards Marina. A nervous Mallet, Frank and Buzz start drinking and preparing for Thanksgiving dinner. A drunk Mallet jumps on the counter and yells out how much he loves Marina and that he wants to marry her. Marina walks in and yells “Fire!” as the smoke detector goes off. The sprinklers go off and the fire is put out. Together Mallet and Marina clean up when Mallet gets sick. Meanwhile Coop is with Beth and he asks her if she is breaking things off with him. Coop tells her that she can go, but she can take the key. Will Beth take the key and continue her affair with Coop?

Stand By Your Man

Lizzie successfully gets Bill’s jacket out as evidence in the trial. When Alan hears the news, he tries to contact Beth who avoids him. Lizzie tells Bill that she got them a big win. Alan tells Lizzie that the absence of Bill’s jacket will seem as suspicious to the jury. During Doris’ press conference, Lizzie demands to know why the DA won’t call her as a witness when she wants to testify. Lizzie pleads with Doris, asking her what she would do if it was Ashlee instead of her. Doris says she would do everything in her power to protect Ashlee. When Lizzie leaves, Alan enters Doris’ office. When Alan leaves, he tells Lizzie that she will testify against the Grand Jury. Lizzie is thrilled and goes to tell Bill that she will speak for the both of them. Even though Alan tries to dissuade her from testifying, Lizzie insists. Josh tries to get into the courtroom and the bailiff refuses to allow him in. Alan gives the bailiff money and gets himself in the courtroom. Lizzie is testifying when Doris enters the jacket in as evidence. Lizzie is stunned and leaves the courtroom. Lizzie visits Bill and hears the charges against Bill while Doris thanks Alan for all that he has done.

Reva tries to get Jeffrey to understand how she feels about the baby and the cancer. Because he is a mother, he won’t know. Jeffrey tries to reason with Reva as there could be a way to treat the cancer and not harm the baby. Reva and Jeffrey meet with Dr. Colin McCabe and Reva gets frustrated. Colin tells Reva and Jeffrey that Reva can go on chemo and protect the baby. When the couple leaves, they run into Josh. Josh tells Reva that Shayne will not be home for Thanksgiving. Reva remarks that she ran out on her children and she will not run away on this child…Christina is relieved when Remy says he got the annulment. However, the papers were not turned in. The two rush to get the annulment stamped but the office was closed. Remy and Christina find the clerk at Company and begs him to help them. Will the couple get there annulment?


Contribute content to TVSource Magazine Content: Fans wishing to send-in news items, previews, show recaps, interview recaps, or anything else newsworthy can now do, with any desired credit, via e-mail to news@tvsourcemagazine.com.